Chris Rock’s the Diversity Controversy, but Thank You Ticker Misses the Mark – Red Carpet Manners at the 88th Academy Awards 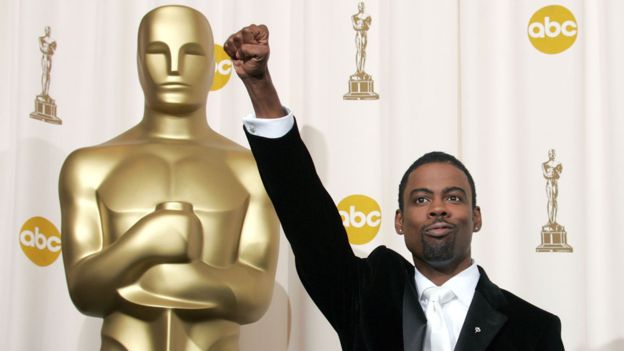 There hasn’t been a more
highly anticipated monologue than the one Chris Rock had riding on his
shoulders at the 88th Academy Awards. The last time he hosted more than a
decade ago, both Jamie Foxx and Morgan Freeman went home with awards, but for
the second year in a row not a single person of color was nominated in the most
prestigious categories prompting the #OscarsSoWhite controversy and tasking producers
David Hill and Reginald Hudlin with the delicate balance of delivering a show
that blended humor with honesty.  What
better man to address the elephant in the room than Chris Rock whose
infectious smile and endearing demeanor manage to pull us in even when he’s going
for the jugular.  During his ten minute opening,
Rock took jabs, both hilarious and poignant, at everything from the show’s name
proclaiming it, “the White People’s Choice Awards” to those who urged him to
back out of his hosting duties altogether, and both Jada and Will Smith who decided
to boycott the show. He included a stereotypical man-on-the-street bit that bordered
offensive and a montage of African American actors recast in this year’s top films that
earned some of the night’s biggest laughs. He made fun of the In Memoriam
stating that it would be replaced this year with only “black people who were shot
by the cops on their way to the movies,” and compared Hollywood casting to a
sorority, “We like you Rhonda, but you’re not a Kappa!” While the awards show
was down to an 8-year low in the ratings, Rock received mainly supportive
reviews, with the exception of the Latino and Asian American communities who
wondered why their efforts were not more mindfully included in the diversity
controversy.  During the three and a half
hour long show, here’s what stood out for us as red carpet manners hits and misses.
Red
Carpet Fashions Flaunted Side Boob. The ladies were showing lots of skin at
this year’s Oscars. With plunging necklines that went practically down
to the navel on some (Charlize Theron, Margot Robbie) and breasts that were
taped strategically into dresses (Olivia Wilde, Rachel McAdams, Heidi Klum), it definitely seemed there were two camps of style,
those that chose feminine and frilly (Cate Blanchett, Alicia Vikander and Heidi
Klum) and others that were more slicked back and severe (Rooney Mara, Daisy
Ridley and Olivia Munn). There was a
great deal of strapless dresses (Naomi Watts, Reese Witherspoon, Kate Winslet, Sophia
Vergara, Tina Fey), embellishments (Emily Blunt, Alicia Vikander,
and Cate Blanchett) and embroidered dresses (Jennifer Lawrence and Chrissy
Teigen). Colors ranged from pastels (Cate Blanchett’s sea foam green) and a
spectrum of jewel tones (Olivia Munn’s rich tangerine, Brie Larson’s royal
blue, and Saoirse Ronan’s emerald) to winter white (Lady
Gaga’s architecturally-inspired ensemble). Most guys opted for the classic man
look (Eddie Redmayne, Leonardo DiCaprio, Bryan Cranston) while the usual
suspects took fashion risks to stand out (Jared Leto). Effortless hair was a
trend on the red carpet (Margot Robbie, Heidi Klum, Saoirse Ronan, Kate
Winslet), as well as flashing tattoos (Whoopi Goldberg).
Red
Carpet Reveals. We
noticed an extremely spacey Jennifer
Jason Leigh offering a rather lackluster red carpet interview with host Ryan Seacrest. Priyanka Chopra divulged that she pre-recorded the
names of the people in her category prior to presenting so that she would not
butcher them live on awards night.  Olivia
Wilde was coached not to hug anyone lest she stain her white Valentino dress,
and when grilled by Billy Bush, Olivia Munn credited Japanese potatoes with
giving her glowing skin.
The
Night of 100 Important Issues. With an audience in the multi-millions, the
Oscars is the perfect platform to share important issues and the winners and
other powers-that-be know this all too well. From the smaller, sweeter
encouragements like that of the Best Animation winner who inspired kids to channel
their angst into creativity to the larger appeals like that of “The Big
Short” director/co-writer Adam McKay, whose message to big banks rang loud and clear. Cheryl
Boone Isaacs so eloquently set the tone for the evening exclaiming that today’s
audience is “global and rich in diversity” and therefore the film industry should accurately
reflect this world going forward into the future. Vice-President, Joe Biden made
a call to action for victims of sexual assault as he introduced Lady Gaga who
performed a song for the documentary film, The Hunting Ground. Sam Smith, who
won for Best Original Song, stood loud and proud as he hoped all citizens of
the gay community would be considered equals one day. Leonardo DiCaprio’s acceptance
speech for Best Actor in “The Revenant” presented him with an opportunity to discuss a
matter close to his heart – the threat of climate change, while the producer for
Best Picture “Spotlight” was able to thank journalists for helping to stop
sexual abuse in the clergy.
Standing
Ovation Suspense. There
was a bit of confusion among audience members as to whether to stand for Vice-President
Biden as he took the stage, but Louis Gossett Jr. took the lead and then other’s
quickly followed suit.  Lady Gaga and her
tribute to the many survivors of abuse garnered the next deserving standing
ovation followed by ‘King of the World’ Leonardo DiCaprio for his 6th
nomination and win for Best Actor.

Utterly
Gracious Upsets. Different
from other awards shows, the camera lens was a bit more generous not lingering on nominees
who lost to exploit there reaction.  We imagine it must be most difficult to lose in a category that the media and everyone else in the world has insisted was a sure thing. To be gracious, smile and wear a brave face as Sylvester Stallone did when he lost the Best Supporting Actor award to Mark
Rylance is a test of resilience.  Eight-time
nominee Diane Warren who lost the Best Song category with collaborator Lady
Gaga found it a bit more difficult to mask her feelings as the camera caught
her visibly upset at the snub.
A
Few Awkward Moments.
Undeniably, the most bizarre moment of the evening arrived when Chris Rock
invited Stacy Dash to the stage. In a joke that was a little too inside, the former
“Clueless” actress and current Fox News outspoken contributor made a facetious move in support of Black History Month that was completely lost on the audience.  Dumbfounded, the silence was so thick, you
could cut it with a knife. In another bid to coax a smile, Rock brought
onstage his Girl Scout daughter and friends to solicit cookie purchases and boost
sales for the Girl Scouts of America. We witnessed a similar version of this
when Ellen DeGeneres arranged for pizzas to be delivered two years ago that was much more original. Finally, when it came time
for the annual introduction of the Price Waterhouse Coopers accountants
responsible for keeping the Oscars ballots safe, Rock poked fun of Asian Americans by welcoming three pint-sized versions
with briefcases instead. Needless to say, this incited a storm of backlash on
social media.

Thank
You Scroll Attempts to Serve Purpose.  In years past, frequently flustered winners have struggled to remember the names of the important people who helped them along the way so producers Hudlin and Hill tried to remedy the problem by requesting nominees to submit a list of names beforehand to ensure thanks to all.  What
was a well-intentioned endeavor to feature the names of executives and agents across
the bottom of the screen may not have helped to curb the length of acceptance
speeches. We noticed many of the winners
ignoring the scroll and giving gushing speeches that thanked everyone on their
team anyway.  In some ways, the thank you
ticker became more of a distraction, especially if you were tempted like I was to
read the names scrolling by at warp speed rather than focus on the person giving
thoughtful thanks on screen.  The bottom
line, it will always be more heartfelt and meaningful to say a name out loud.