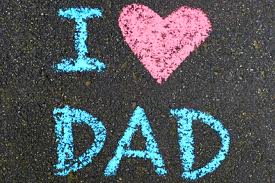 When it comes to
celebrating a day for parents, somehow dads seem to fall on the short end of
the stick.  Father’s Day is paid about as
much attention as the red-headed step-child sitting in the corner.

Mother’s Day,
however, is a very different story with the build-up beginning months in
advance!  Dads everywhere scramble for
brunch reservations or spa appointments to ensure their better-halves are pampered
and tended to on their special day.  This
delicate showering of affection is not necessarily out of love, but out of fear
that if they do not do everything in their power to ensure Mother’s Day is
unique and special, heads will roll and someone’s gonna have to pay!

I happened to ask several
fathers over the past week what their plans were for Father’s Day and I was met
with the same blank response that assumed not much fan fair had been discussed
around the subject. But, you won’t see dad sulking on the couch or screaming at
the top of his lungs that no one appreciates him.  Instead, he’ll simply smile and be thankful
for whatever morsel of kindness is bestowed his way.

Don’t give dad the
shaft this Father’s Day, find a few ways to make him feel at least, almost
equally as special as mom (wink).  Here are several ideas, although last minute, to show him you really care.

Let
Him Be King of His Castle.  Let dad be in charge of the remote and settle in on a program that he likes – for once! If he wants to wear
his favorite ratty old college shirt with the holes, so be it!  Hand him the sports section of the Sunday
paper so he can read it cover to cover wherever he pleases.

Give
Him Some Space. As much as dad loves hanging with the
family, this might be the perfect occasion for mom to take the kids out for a
few hours to allow him some “me” time to relax without feeling guilty.

Get
Outdoors.  If dad is
an athlete, offer to throw around the ball outside.  If he loves hiking, find a trail that has a scenic
view and plan a picnic at the top. If biking’s his thing, go for a ride along
the beach and follow it up with lunch at one of his favorite haunts before
heading home.

Present
Him with a Gift He Will Truly Enjoy.  Don’t get dad a last minute practical gift because he
needs it, use this opportunity to present him with something fun and unexpected
that he will truly enjoy. Perhaps a book of 10 movie passes if he is a movie buff or
a set of Beat Box headphones for the music lover who loves to sing in the shower.

Make
Him a Home-Cooked Meal. We all know that the way to a
man’s heart is through his stomach.  If
he loves to BBQ, marinate his favorite meat for grilling and couple it with some tasty Cole
slaw and beans as sides. If dad is newly vegan?  Channel Alicia Silverstone and whip up a tantalizing tofu or vegetarian recipe online that will punch with just as much flavor.

Happy Father’s Day to
dads everywhere from your loving wives and children!!
xoxo