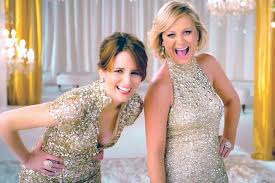 All in all, we give the show a thumbs up.  Love the fact that we can watch it live on the West Coast and be in bed nice and early on a Sunday night!!  See you next time at the Oscars…
What did you think of this year’s
ceremony?  Did we leave anything
out?  Any other red carpet commentary
that we missed?  Please share with
us.  We’d love to hear from you.