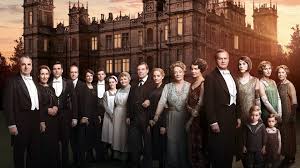 I am truly sad. After six seasons, Sunday marked the end of an era here in the United States with the airing of the final episode of beloved PBS drama “Downton Abbey.” A show that held us to the highest standard and walked us through the beautiful lives of the British aristocracy has bid us adieu. It’s ironic that this critically acclaimed historical period masterpiece is leaving us at a time in our history when we need it most. We can no longer count on the Crawley family and their dutiful servants to lead us through a life of civility. Instead, we are faced with a climate filled with chaos particularly within our political process and led brazenly by Republican frontrunner, Donald Trump.

As the owner of an etiquette consulting company, it has been exceptionally difficult to process the response Donald Trump has received from the masses. From the moment he threw his hat into the ring it’s been an endless round of insults, jabs, punches and blows. Where the occupants of Downton Abbey have been trained in the school of elegance, formality, and restraint, Donald Trump takes his cues from World Wrestling Entertainment repeatedly smacking down opponents and spewing offenses for pure entertainment. My husband happens to represent WWE wrestlers so I know from what I speak.  Somehow he has successfully pushed the limits well beyond comfort level appealing to the anger and disdain of our nation. Up to this point, his unorthodox behavior has been impervious to social norms making up his own rules with no subject, personal or professional, too taboo.  Whether he’s obnoxiously attacking an opponent on their physical features, unbelievably pretending not to hear a question involving KKK leader, David Duke, outrageously encouraging his supporters to raise their right hand and pledge their allegiance to his campaign, or peddling his personal brand of Trump products, he remains virtually unscathed and continues to crush in the polls. Astonishingly, he has single-handedly inspired more voter turnout than we’ve seen in the political system in recent history.  This guy’s on a winning streak that won’t end.
In preparation for the Downton finale, I viewed a double-feature of the “Manners of Downton Abbey” and “More Manners of Downton Abbey” which only served to underscore the many differences we are witnessing today in bold, high-definition color. From the style and grace that ruled their behavior to the gorgeous self-control that governed each movement and utterance. Not a step was taken or word was spoken without careful consideration and precision. Manners played an integral part of their daily lives. They provided structure, meaning and a code of conduct to live by – they were a rulebook to follow regardless of social class.  In stark contrast, we are witnessing a fly-by-the-seat-of-your-pants craziness laced with vulgarity and vibrato.  Manners are cast aside as an afterthought, while the disrupters, the rule-breakers and trouble-makers get things done.  So how do we make sense of this all?  How can we make peace with this shift in behavior?  Is there a sweet spot that lies somewhere in between the two?  In order to discover, let’s take a look at some of the key areas in which Downton and the Donald differ.
Character
Downton Abbey:  A cool reserve was the definition of good character.  Formality took precedence over everything. A disciplined restraint was observed at all times. Accomplishments were downplayed and humility was favored.  There was a deep sense of honor and attention paid to tradition and customs.
Donald Trump:  Good character means winning. He is attention-seeking and smug unabashedly sharing his list of accomplishments and conveniently forgetting his failures.  He doesn’t feel beholden to the traditions or customs of the political process preferring to make up his own rules as he goes.
Language
Downton Abbey. Careful consideration was given to how to speak, when to speak and what to say. Conversation was formal, indirect and devoid of emotion.  Words were used sparingly and methodically.  Vocabulary was intelligent and incredibly witty.
Donald Trump: His rhetoric is a symptom of our society today, uncensored and without filters.  It leans towards the simplified, the crass, and the monotonous. He is the king of catch-phrases, one-liners, and absurd attacks. He is quick to insult, brag, bully or be on the defense.  He does not back down and likes to have the final word.
Deportment
Downton Abbey: Body movements were kept to a minimum with posture stick straight whether sitting or standing.  Hand gestures and facial expressions were barely detectable. Nothing was done with haste. Confrontation was to be avoided at all costs.
Donald Trump: He prefers a big entrance. His boisterous movements are taken right out of the WWE playbook. His facial expressions are priceless and comical. He is quick to gesture and point.  He relishes in inciting the crowds and dissing his detractors. He thrives on the spectacle, showing energy and plenty of passion.
Money
Downton Abbey: Money was never mentioned in polite conversation. Knowing your place in the social hierarchy was not privilege, it was a duty and, therefore, came with responsibility. It was rude to be snobbish.
Donald Trump: His wealth is repeatedly mentioned without an ounce of modesty or shame.  Whether he’s proudly defending his self-funded campaign, disputing his personal net worth, or touting the vast Trump brand, he fancies the flashy showing nothing but contempt for anything understated.