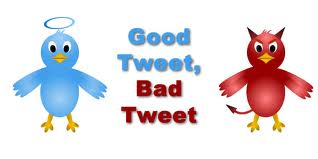 I first heard of Twitter back in January of 2008.  A gentleman I was working with on marketing my business alerted me to the tool and explained it as a distilled form of communication, namely 140 characters that basically answered the question in real time, “What are you doing now?”  For months, users would post such mundane musings as what cereal they were eating for breakfast to where they were heading off for their next yoga class.  Since this was an election year, I also remember hearing the word used heavily around President Obama’s campaign.  While other more senior candidates were busy communicating the old-fashioned way, a younger Obama and his social media savvy staff used the new tool to reach their constituents and encourage a national dialogue in a way that had never been achieved before.  Twitter may have even helped to secure the election for our President and today this is still a very big part of his presence.
Nowadays, Twitter is everywhere.  Politicians, athletes and celebrities all use it to spread their messages, tout their achievements and increase their platform.  Twitter has had an increasingly powerful impact on the corporate world where major brands hire social media staff to tweet hourly messages about exciting products and services or other relevant information.  Twitter has also taken on the responsibility of being the first line of communication during natural disasters.  We witnessed this up-close and personal back in March with the tsunami in Japan.
I personally got into the Twitter game about two and a half years ago posting tweets with basic etiquette tips every now and again, but it wasn’t until this year that I realized the magnitude and gravity of this powerful tool.  Today, I have two Twitter handles, @90210manners for the majority of my posts on a variety of etiquette topics and @redcarpetmanner for more celebrity driven etiquette posts and try to post topical items on both.  To help streamline and organize my posts, I often turn to Hootsuite, a tool that also allows me to schedule my posts when I’m crunched for time, but want to appear current.  For me, Twitter has taken over as my preferred method of social media interaction much more so than Facebook. I suppose I find it easier to communicate using the condensed language.
As I’ve grown to feel more comfortable using Twitter, I have become acutely aware of the positive aspects, as well as the negative pitfalls.  I’ve heard the countless news stories and witnessed the careless tweets that brought upon the demise of various politicians, athletes and celebrities.  Not to mention, the innumerable thoughtless tweets that are posted daily that result in irreparable repercussions.  It is for this very reason that we find it critically important to review the rules of etiquette surrounding Twitter so that we use it wisely as a means of communication and not abuse like a weapon of mass destruction.  Here are our top etiquette tips to consider!
Stay out of the kitchen, if you can’t take the tweet.  If you have made a career of living in the public eye and taken to tweeting to share your most intimate and inane thoughts, then you are also opening yourself up to tweets of equal criticism and backlash. Case in point – when Kim Kardashian announced her divorce from Kris Humphries after a mere 72 days, she set off a firestorm of tweets chastising her for not returning the engagement ring and the wedding gifts.   Whether you are living under the scrutiny of the public eye with millions of followers or the master of your own domain with 5,000 followers, you have to be willing to play the game and take the heat.  Tip: Take the high road and only engage in positive commentary on Twitter.  Avoid responding to angry or upsetting tweets.
Check yourself, before you wreck yourself.  Ashton Kutcher, the poster man for Twitter himself, took a major tumble this past weekend learning a very important lesson the hard way.  Before doing his due diligence, Ashton Kutcher irresponsibly launched an opinionated Twitter comment about the firing of Penn State football coach Joe Paterno that landed him in some pretty hot water.  The result was apparently so shaming that Mr. Kutcher vowed to leave the tweeting to his staff until further notice.  When you have that much influence, it is imperative that you think before you tweet, lest you say the wrong thing and suffer the turbulent consequences. Tip: Do your homework and make sure you know all the facts before dispensing your opinion for all the world to see.
Think before you tweet your own horn.  It’s hard not to be boastful, especially when we want to share an achievement of some sort, but the delivery of the message must be carefully thought through so that it doesn’t come across as arrogant. A perfect example of this was Alaskan Republican Senate candidate, Joe Miller, who took to Twitter to jab his opponent by suggesting that he was already taking measurements for the drapes and purchasing furniture for the office. When blasted for his insensitive comments, he blamed it on a volunteer claiming they were responsible for the tweets.  Little did he know, his opponent, Lisa Murkowski, would have the last laugh as she later went on to win the election and chastised him for his inflated self-confidence. Tip: Be humble and gracious.  If you are lucky enough to share an achievement, be sure to thank those who helped you get there.

A tweet paints a thousand words.  Just ask past Representative Anthony Weiner, who in a fleeting state of narcissism, decided to take a vulgar picture of himself to send to a female college student as a flirtatious introduction. When word got out, he was confronted and denied the allegation.  After a series of facts were uncovered, Representative Weiner admitted his fault and wound up suffering the wrath of the people and the state of New York.  The result of this one casual photo led to the removal of his position in office and branded him a disgrace.  Tip: Everything on Twitter is permanent and can be traced.  Stay away from tweeting photos that present a negative image.

Tweet this, not that.  There are good tweets and bad tweets.  Good tweets are full of valuable information that enlighten, inform, entertain and educate. Bad tweets are filled with gossip, slander and vulgar information. Twitter, when used properly, is a tremendous springboard for making announcements as Billy Crystal did when he humbly proclaimed that he would be taking over the hosting duties for Brett Ratner who recently stepped down from the post due to his poor behavior.  Twitter moves people into action as thousands rallied to help the victims of hurricanes Katrina and Irene, as well as the tsunami victims in Japan.  Tip: Use common sense and look before you tweet.  Take a moment and think to yourself, “Do I really want/need to share this thought with the world or am I about to jump off a bridge?”  A quick soul searching should provide you with the right answer.
Tweet responsibly!
Twitter celebrated its fifth anniversary earlier this year.  Here is a list of 30 famous first tweets http://mashable.com/2011/05/10/celebrities-on-twitter-30-famous-first-tweets/.  Have any unique Twitter tips you would like to add? Share with us, we’d love to hear from you!