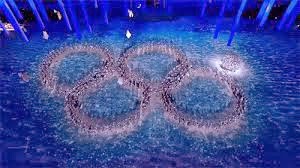 After
17 days, the XXII Sochi Winter Olympics has come to a close.  Seven years in the making and the most expensive
Olympic games to date, Russia showcased a newly transformed country worthy of
world recognition and finally shed the old imagery that existed prior to the Soviet
collapse.  The opening and closing
ceremonies portrayed a country rich in culture and proud of their heritage with
elaborate productions that highlighted their excellence in classical music, ballet,
literature and philosophy. The host country placed number one overall accumulating a total
of 33 medals.  Precautionary measures to
keep surroundings safe and free of terrorist threats thankfully succeeded and the
help of twenty-five thousand happy volunteers helped to smooth over any other ruffled
feathers.
Still,
Sochi was not without its share of problems.
See meme #sochiproblems. The most noticeable embarrassment suffered was the
5th Olympic ring which failed to light up during the opening
ceremony. This was humorously addressed during the closing ceremonies with a
self-deprecating sequence that showed a purposefully delayed formation of the 5th
ring. Other ongoing storylines surrounded the unusually warm weather with
temperatures hovering in the 60’s making the snow slushy and causing the
athletes to take more serious tumbles than usual. The Olympic village accommodations
caused frustration for a number of athletes and reporters who dealt with spotty
electricity, running water and poor internet connections. And, despite Russia’s
best attempts to display a welcoming image, controversy loomed over the discrimination
of human and gay rights.
On
U.S. soil, viewers had to overcome hampered coverage by sportscaster Bob Costas
who suffered an untimely double bout of pink eye until pitch hitters Matt Lauer
and Meredith Viera came to the rescue. It was not the easiest of games for Team
USA who placed fourth in gold medals and second overall with many of its most
prominent Olympians barely placing or garnering only a bronze.
Each
Olympics reminds us of our increasingly globalized society and the opportunity
it allows our Olympians to act as mini ambassadors of the U.S. putting forth
a message of international peace, tolerance and respect. With that in mind, here is our list
of medal worthy manners moments and missteps. Who exemplified Gold medal characteristics and who didn’t make it to the podium at all.


Medal Worthy
Perseverance
Pays Off.  Meryl Davis and Charlie White won their first Olympic gold in ice
dancing after 17 years of practicing together.  They are partners in dance only, have a
strong work ethic, share a mutual respect and value the importance of an education.  Both are pursuing a degree at the University
of Michigan.
Bode
Miller, Good Guy.
Inspirational skier and medal record holder, Bodie had a rough time at Sochi and
most likely raced for the last time in his Olympic career.  He said, “It’s
tough to have my last race here look like that,” Miller said. “But I
feel really good about where I am. I feel like I did my best. ”  When questions arose around an emotional interview
he gave to NBC regarding the pain of losing his brother and being the
oldest medalist in alpine skiing history, he defended his interviewer on
Twitter.
Tearful,
but Proud.
After thinking they had the gold in the bag, The U.S. Women’s Hockey Team
suffered a brutal loss to Team Canada in the final four minutes of the game. Although
devastated they didn’t win the gold, members of the
team choked back tears as they picked up their silver medal and professed how
proud they were to have represented the U.S. in this year’s Olympics.


Young and Hungry.  Mikaela Shiffrin is a mere 18 years old and won the gold in the women’s slalom.


Puppy Love.  Gus Kenworthy, the silver medal-winning slopestyle American skier, upset by all of the stray dogs wandering Sochi took it upon himself to arrange kennels for the puppies and get them vaccinated in the hopes of taking them home to the states.
Gracie is Gold.  She may not have
won the gold, but she delivered extremely solid performances with grace and style.  Her excitement and enthusiasm were highlighted
by her beautiful smile.
Medal
Missteps
Loss
of Steam.  They were riding high on a winning streak
until their final games with Canada and Finland. After suffering the
embarrassment of not being able to score a single goal,  rather than continue with drive, perseverance
and team spirit, U.S. Men’s Hockey Team became disenchanted and played as if
their heads were no longer in the game.
Pressure to Succeed.  Countless medals and a showering of accolades makes repeat performance almost impossible.  Team USA’s most prominent American Olympians, Shawn White and Shani Davis, fell under the pressure to succeed and live up to the expectations suffering losses early in the competition.  Shawn backed out of one event much to the dismay of his fans and then failed to medal in the halfpipe, his signature sport. Shani also gave a disappointing performance.
Sour Puss.
All eyes were on Ashley Wagner who initially radiated with a hopeful
smile after her short form skating performance, but then quickly turned sour when
she heard the judge’s low scores.
Clearly upset and unable to control her reaction, she scowled while
mouthing a profanity to one of the teammates seated in the ‘kiss and cry’
section launching the first viral meme of the Winter Olympics.

See you in Pyeongchang…