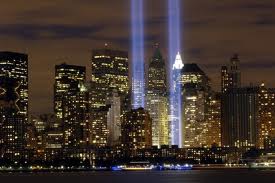 On Tuesday, September 11, 2001, it was an otherwise typical morning.  I was 6 months pregnant and lying in bed with my husband. I didn’t get much sleep the night before as I was already carrying about 30 pounds plus extra baby weight on my 4 foot 11 inch frame and peaceful slumber was not part of the program.  When the clock finally struck 7:00am, I figured it was okay to turn on “The Today Show” and let the day officially begin.
The phone rang shortly thereafter.  I never like phone calls early in the morning, or frankly anytime late at night, because it is never a good sign.  My father, who was sitting at the Coffee Bean, frantically called to tell me to turn on the television because the World Trade Center had been hit by a plane and was about to collapse.
My heart immediately fell into my stomach.  What I witnessed across the screen was almost too much to bear. Like everyone else who woke up that morning thinking it was just another regular day, I was totally blindsided by the disastrous vision that was unfolding before my eyes.  I was not physically in New York City, the place of my birth, but the emotion was just as raw and unnerving as if I were standing on the streets of Manhattan watching the world collapse right in front of me.
As the newscasters reported each new catastrophic development from the frontlines, the pain in my stomach increased. By this time, the news had broken that the airline crash was not an accident, but a sheer act of terrorism against our country. I immediately began to worry about the health of my baby. What kind of world was I bringing he or she into?  Was Los Angeles the next big city target?  Was I going to send myself into early labor because of the stress?  After a couple of hours with my eyes glued to the television, I finally had to turn it off and meditate to some relaxing music.  It was all too overwhelming.  Thankfully, as the days went on the pain in my stomach subsided and three months later I gave birth to a healthy baby girl.
Ten years later, as we memorialize one of the worst days in American history, we also celebrate a great country that honors the heroic men and women who risked their lives and displayed unbelievable dignity and bravery during a time of enormous need. Their courageous stories, their incredible calm, and their collective strength of steel will forever be emblazoned in our hearts.
Whether you choose to attend a memorial, say a personal prayer, raise a glass, or do something charitable to observe this 10th anniversary, be sure to pay your respects with thoughtfulness, sensitivity and consideration by following our helpful guidelines below.
Fly a Flag.  In 2001, the House of Representatives declared, September 11th “Patriot Day” to recognize those  “who serve in the military, those who travel to dangerous places in the name of freedom and all those who work here in our nation to ensure our safety.”  In remembrance, all American Flags should be flown at half-staff from sunrise to sunset. U.S. flags on state buildings should fly at half-staff from Friday morning until sunset on Sunday.  With regard to flag etiquette, the flag should never touch the ground, it should never be written upon, no other flag should fly above the U.S. flag and flags in poor condition should not be displayed.
Show Your Patriotism.  If you are attending a memorial on this day, dress appropriately for the occasion.  9/11 is a somber and patriotic event so colors that are subdued or that represent the American flag in shades of red, white and blue are a wonderful way to show your spirit.  Americans are encouraged to wear a flag pin on their lapel even if they are unable to attend an event observing the anniversary.
Lend Support. Suffering a loss and experiencing grief is a very personal process for the victim. Although the wounds are not fresh, some individuals may recall feelings of loss or depression. To show your support and offer comfort, simply be available and let the person know you are there for them.  Get physical. A hug or embrace may be just the thing they need to alleviate some of the pain they are suffering.  Propose assistance with errands, grocery shopping or watching the kids so that they may have some additional alone time to remember and grieve.  Listen and empathize. Sometimes, all we need is someone to hear us and then we can move on.
Do Something.  How each individual decides to commemorate this day will vary.  Some will make a plan to unite with friends and neighbors to reflect on how America came together ten years ago, others will observe with personal reflection during a religious service or donate their time to an organization or charity.There are numerous ways to get involved from Viacom’s, national day of service campaign that asks, “What will you do to remember?” to countless 9/11 events happening across Southern California. I plan to  attend the unveiling of the Beverly Hills 9/11 Memorial Garden with my family.


Just for Kids.  The 9/11 anniversary raises the question of how to address tough topics with our children.  Parenting website, Mamasource, offers a perfect solution with easy to follow advice.