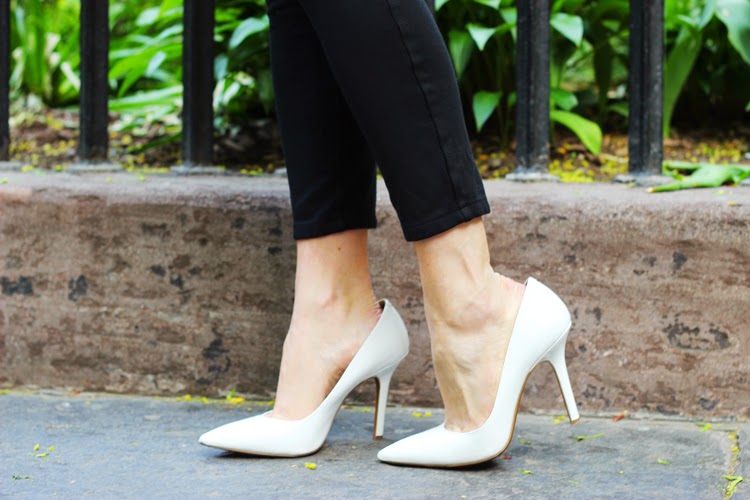 After
a weeklong of seeing white featured on the red carpet, as well as adorned on
the bodices of women and men strutting the streets and beaches of sunny
California, you might think the color was experiencing its last hurrah. At the VMA’s,
it displayed its daring on musical artists ranging from Jordin Sparks and Jason
Derulo to Nicki Minaj and Usher who flaunted various looks. It revealed its
versatility at the Emmy’s with a string of actresses including Sofia Vergara,
Robin Wright, Kristen Wiig, Anna Chlumsky and Laverne Cox who all jumped on the
white bandwagon  looking absolutely
fabulous. And when it comes down to a clean fresh look, you’d be hard-pressed
to find anything that beats a spotless pair of white jeans, a sleek white pump,
a crisp white button down or a tailored white tuxedo regardless of the season.  No longer chained by the stringent rules of
summertime, this color on the spectrum has finally cut loose and is primed and
ready to head full throttle into fall.
Historically,
there were a number of reasons behind the notion of no white after Labor
Day. For example, in the early 1900’s before the invention of air conditioning,
white clothing was cooler and certainly more convenient for the hot summer
months.  During the summer, white garments
were frequently regarded as a look of leisure.
Once fall arrived, it was time to put away the summer whites and don
more traditional formal work clothes. It was also a practical remedy for the
approaching rainy season, especially in cities like Chicago and New York.  Years later, the fashion industry embraced the
color white with open arms and has draped various shades of white on models and
celebrities alike.
But
why is the color white so particularly appealing now?  Perhaps in an age of oversharing,
overindulgence and overloading, white symbolizes all things simple and
pure.  In a complicated world where we
are inundated and bombarded with endless information, it reminds us to return
to a time of innocence and getting down to the very basics. During a precarious
time in our history where war is prevalent, it provides us with a feeling of
freedom, of lightness, of striving for perfection amidst all of the chaos.  So don’t let your white frocks slip away with
summertime, here’s a few tips on how to rock white well into fall and beyond.
Daily Uniform.  You will always be fashion forward wearing a
well-pressed white button down blouse or dress shirt.  Paired with anything from dark denim jeans to
an embroidered ball gown skirt (think Carolina Herrera), it is perpetually fresh
and stunning.
Wardrobe Staple.  A
white blazer or coat is an impeccable addition to any outfit.  It lightens up your mood along with your style
and becomes a people magnet as others are drawn to the brightness.
Night on the
Town.  Rather than the usual LBD, choose a white sleeveless
dress in a winter fabric or a sleek white pant suit that moves as gracefully as
you do. These are gorgeous looks that are guaranteed to turn heads.
Don’t Be Afraid
to Accessorize.  Captivated by a pair of white leather
booties? Have your heart set on a white suede clutch? Going crazy for that
white cashmere scarf?  Don’t let the fear
of stains stop you.  These may not be
everyday pieces, but they are treasures to break out for a night out with
adults.
Keep it Spotless.  If you decide to don your white wears, be
prepared to combat stains head on. Have a small package of baby wipes handy for
accidents. The alcohol in the wipes will take out even the most stubborn of
stains whether they be from red ketchup or red wine.