“Naughty vs. Nice” – Why Be Nice When Naughty Seems To Have All the Fun? 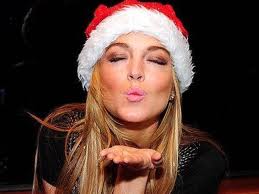 I’ve had a lot of issues with this “naughty versus nice” dilemma. As a mother raising two impressionable girls and an etiquette instructor attempting to make headway in a society where vulgarity is the preferred norm of existence, I have a double interest in the cause. Just listen to the news on any given day and you’ll hear countless stories of celebrities, athletes and politicians who have fallen from grace and made headlines with the naughty things they have done. These clips are tenfold in comparison to the lesser known good deeds or simple acts of kindness these same figures may have demonstrated in their past.
What happened to the innocent young children who were once consumed with getting on Santa’s good side to ensure a gift? I wonder if they find the naughty side more attractive and appealing? How could they not when they are inundated by these images in the media? This whole “catching flies with honey business” (being nice) isn’t necessary in order to grab your 5 minutes of fame. All that is needed is a little cat fighting, some hair pulling and name calling and you’re in like flint with a new television contract and a product licensing deal. These are the messages our children are receiving and this is what is influencing their behavior. Although there is still the sprinkling of interstitials by well-known figures reminding us to give to those less fortunate or be mindful of others, those are few and far between and hardly make a difference.

So this December when children everywhere are contemplating their fate to determine which side of Santa’s List they will appear on, I thought I’d take a closer look to find out why being nice has fallen by the wayside and being naughty has become the new aspirational goal.

1. Being nice does not mean you have to be a doormat. People sometimes confuse being nice with being a wallflower or a doormat. The type that lets everyone walk all over them. This is absolutely not the case. Being nice does not mean you must be agreeable all of the time or play the martyr. You can be nice and still be real and true to yourself as well as others. Being nice simply means being considerate and respectful. It also implies that you take a moment to put other people’s feelings before your own and that you act with civility.

2. Only the good die young. Billy Joel’s famous last words remind us that if we are good (nice), then our time on this earth is limited. Could there be some truth to this phrase? How else do we explain the untimely deaths of everyone from Martin Luther King Jr. to Elizabeth Edwards? On the flip side, think about how many rat bastards (naughty people) seem to stick around forever virtually unharmed! Unconsciously, perhaps this is encouraging us to err on the side of naughty to ensure we’ll live well into our nineties!

3. Do not confuse the word “nice” with wallflower or milquetoast. A nice person may surprise you. If someone is described as nice, it does not mean they are meek or timid or even unassertive in their nature. It may simply mean that they have mastered the fine art of socialization. Their intentions are not calculated or cold. They do not have to resort to anger or crazy behavior that is typically associated with being naughty or nasty. They are just naturally able to make others feel good while still getting what they want or achieving their goals.

4. Nice guys finish last. The term “nice guy” originated in the dating world to describe a man who was emotionally supportive, kind and considerate towards women. The nice guy was the man who got the woman in the end because he was the marrying kind and would make a good father to their children. Rather than spend a lifetime of heartache and headache chasing the naughty boys, wise women learned to settle down with the nice guy who treated them with respect and put them on a pedestal. Note: Don’t underestimate the nice guy, just because they’re nice doesn’t mean they don’t know how to get naughty in the bedroom.

5. It is the nice thing to do. We are constantly being told this phrase by others. Parents especially like to impress this upon their children to teach them how to behave in the world. Oftentimes, these words come across as patronizing and actually have the opposite effect making us want to do the naughty thing instead just out of spite. Rather than making this feel like a chore, we have to begin internalizing the act of being nice to thereby make it feel more automatic. With practice, it should feel more comfortable and natural.

Finally, making a case for a return to nice. Isn’t it time we got over all this naughty behavior and concentrated on just being nice? After all, it does reap its own rewards and it certainly feels a lot better. Take Kelly Osbourne, for example. Here’s a young girl who was best known for her naughty escapades, lewd behavior and even more crude language on the MTV reality series, “The Osbournes.” Now, several years later, she has slimmed down considerably, curbed her language and has actually become quite the young lady appearing as an expert for her generation and commenting on everything from style to deportment. If you were to ask her which way she prefers to view herself, I guarantee it would be in the present form. She has really transformed herself, a far cry from her peer Miss Lindsay Lohan (pictured above) who has continued her naughty ways. So think twice kiddies before making your decision this year and let’s see if we can make a concerted effort to lengthen Santa’s “nice” side of his list.