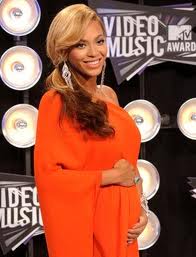 The ladies stole the show at the 2011 Video Music Awards.  Beginning with the arrivals on the black carpet (apparently the red carpet wasn’t cool enough) and continuing with the first draw dropping performance of the evening right up until the final farewell tribute and award for Best Video of the Year.  It was a fascinating night filled with theatrics and thoughtfulness with some of the biggest female names in the business sweeping most of the awards.  The only lady missing, was one Taylor Swift. Nominated for Best Video with a Message, the 21 year old chanteuse was downtown tending to her own audience of thousands at the Staples Center.
Without a host (or hostess, remember Chelsea Handler last year?) to make fun and point fingers at the performers in the audience, the artists behaved pretty well.  There was no single event that turned sour (a la Kayné West circa 2009).  Just the typical amount of gross humor, especially when the girls (I can’t call them ladies) from “The Jersey Shore” took the stage.  For the most part, however, it was pretty uneventful show.  Instead of the usual MTV debauchery, we mainly saw support and encouragement from the artists, at least on camera. Collaborators sat together, friends patted one another on the back, fans stood and sang their favorite songs. Seemed like a good night was had by all.  Here are some of our red carpet manners hits and misses.
Outrageous Outfits. Never ones to disappoint, both Nicki Minaj and Katy Perry donned costumes that sparked many a conversation.  We’re not quite sure what look Miss Nicki was going for this evening. Her outfit apparently made of stuffed animals along with her surgical mask and ice cream cone necklace had us confused. Was she going to a children’s hospital or a children’s birthday party?  Not one of our favorites.  Neither was Miss Katy’s outfit changes.  Tonight she missed her mark, especially with the yellow colored block of cheese that somehow appeared on her head just in time to accept her award for Best Video of the Year. What in the world was the inspiration for that hat?  I was so distracted, I couldn’t even focus on her speech! Did she remember to thank her husband?
Triple Threats. Two of the greatest female entertainers of our generation, Lady Gaga and Beyoncé pulled out all the stops singing, dancing and acting their way into our hearts providing us with two incredibly meaningful performances.  Who would’ve thought Lady Gaga could top last year’s meat-themed outfit, but she did. Dressed as her alter ego, Joe Calderone, Gaga took to the stage cigarette in hand and recited a monologue before launching into her latest gut wrenching anthem entitled “You and I.”  An hour and a half later, Beyoncé appeared complete with glittering costumes and blowing hair to deliver her new upbeat tune, “Love on Top.” Smiling from ear to ear, she could not contain her excitement over the news that she and hubby Jay Z were expecting. As if to confirm the good news, at the end of the song, she unbuttoned her blazer and revealed her bulging belly for all the world to see.
Tributes.  Looking better than she has in years, Britney Spears, was back in full force to accept the Michael Jackson Video Vanguard Award.  Rather than resort to old tricks, thankfully she avoided the lip lock with Gaga.  Although her acceptance speech sounded rehearsed, she kept it short and sweet and made it through virtually unscathed.  When it came time for the Amy Winehouse tribute, Russell Brand began with a sober note (no pun intended) on the dangers of addiction that hopefully many of the young people took to heart.  He then introduced Tony Bennett who praised Miss Amy’s jazz singing abilities and showed footage of her performance with him on his Duets 2 album. Following Tony Bennett, Bruno Mars offered a lively rendition of her hit single “Valerie” that solidified her reputation as one of the great talents whose important contribution to music will be sorely missed.
Hostess with the Mostess?  Was it just me or did Miss Selena seem a bit out of her element.  She is one talented young lady, but perhaps the VMA’s are not her thing. I felt her straining and feigning enjoyment.  Her interview with real life beau, Justin Beiber, was particularly awkward. After trying to maintain her professionalism and distance, he looked at her and gave her a giant kiss on the cheek that completely broke her composure.  She rarely smiled and rushed through her lines. Sorry Selena.
A Few Honorable Mentions for the Boys Team. We have to give credit where credit is due. Well-known bad boys, Kayné West and Chris Brown, behaved themselves tonight. Kayné appeared pumped and excited about his latest collaboration with best bud Jay Z.  Although I could barely understand a word they were singing, the two seemed to enjoy performing their latest single “Otis” together. Chris Brown also kept himself in check (probably because he was too exhausted from rehearsing all of those aerial acrobatics) and outshined everyone with his effortless dancing skills.  Finally, we really enjoyed the straightforward delivery from the new indie band Young the Giant. That lead singer, Sameer Gadhia, is one talented fellow and had us captivated.
Tonight’s complete list of winners.
VIDEO OF THE YEAR: Katy Perry – “Firework”
BEST NEW ARTIST: Tyler, The Creator – “Yonkers”
BEST HIP-HOP VIDEO: Nicki Minaj – “Super Bass”
BEST MALE VIDEO: Justin Bieber – “U Smile”
BEST FEMALE VIDEO: Lady Gaga – “Born This Way”
BEST POP VIDEO: Britney Spears – “Till the World Ends”
BEST ROCK VIDEO: Foo Fighters – “Walk”
BEST COLLABORATION: Katy Perry Featuring Kanye West – “E.T.”
BEST ART DIRECTION: Adele – “Rolling In The Deep”
BEST CHOREOGRAPHY: Beyoncé – “Run The World (Girls)”
BEST CINEMATOGRAPHY: Adele – “Rolling In The Deep”
BEST DIRECTION: Adele – “Rolling In The Deep”
BEST EDITING: Adele – “Rolling In The Deep”
BEST SPECIAL EFFECTS: Katy Perry featuring Kanye West – “E.T.”
BEST VIDEO WITH A MESSAGE: Lady Gaga – “Born This Way”