At Super Bowl Fifty-One: Forget the Game, All Eyes are On Gaga 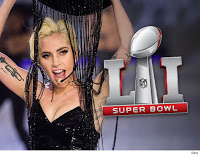 Preparing for Super Bowl takes the competition to a whole other level.  Over 110 million people are parked in front of their big screens to watch the spectacle worldwide. Commercials cost as much as $5M for as little as 30 seconds of air time. It is the second-largest day for food consumption only to Thanksgiving.  Americans slug over 325 million gallons of beer and don’t even get me started on the amount of guacamole and chicken wings that are downed for the big day.


This year Bill Belichick has brought his New England Patriots back to Super Bowl LI for the 9th time a potential 5th win to play the Atlanta Falcons who haven’t been invited back since they lost to the Denver Broncos in 1999.  An estimated $4.7 billion will be bet on today’s game.


While throngs of fans are lined up to watch football, I am gearing up for Gaga.  I’ll be on the edge of my seat come Half-Time waiting with anticipation over what color hair she’ll don, how many revealing outfits she’ll wear, will she appear as her alter ego Joanne complete with a cowboy hat or as Gaga circa 2009 when her career first took off?  And, most importantly, whether she’ll use the stage to chastise our 45th President creating, even more, divisiveness or will she take the high road and use this incredible platform as an opportunity to bring Americans together.  The jury is out, but we are the judge.  So today as you get ready to cheer on your favorite team while consuming massive amounts of food and guzzling unimaginable quantities of beverages, remember to stay mindful of those around you.  The NFL players aren’t the only ones being held under a microscope, don’t be mistaken, your nearest and dearest are holding a close lens on you too.  Before stepping foot out the door, here’s how to best mind your manners this Super Bowl Sunday.


Arrive on Time and Bearing Gifts.  Official start time isn’t until 3:30pm Pacific, but many parties will begin well beforehand.  Whatever you do, plan your arrival before kickoff so hosts will not feel compelled to welcome you and interrupt their viewing. Do not show up empty-handed. BYOB (the good stuff please!) or break out your stellar 7-layer dip recipe and you’ll be the life of the party.


Keep it Friendly.  Sunday is a family day so children are typically in tow.  Keep the atmosphere friendly and comfortable for everyone.  Reserve the foul language for the street when you’re walking to your car at the end of the game and monitor your alcohol intake so you don’t embarrass yourself and regret your behavior the next day.


Acknowledge the National Anthem.  The moment you hear the music play and hear Luke Bryan hit his first note, it’s time to stand up straight, remove all head coverings, and place your hand firmly on your heart.  We stop and do this simply as a sign of respect.  All conversation should cease, but singing is encouraged right along with Ms. Gaga until the very last word is sung.


Pay Deference to the Screen. Super Bowl fans want sufficient screen time, but there are always those who are more interested in making conversation than watching the game.  If there are multiple screens, station yourself in the room where you’ll cause the least disruption. If you can’t find a seat or feel compelled to stand and shout for your team, just make sure that those behind can still see the game. And for goodness’ sake, no giant hats or wild accessories that will prohibit the view.


Stay on Topic. On Super Bowl Sunday, the dialogue should be on the game. Know your facts beforehand so you are well-versed in the teams that are playing and the host city.  Learn the vernacular, know the difference between a touchdown and a field goal.  You want to be able to bond and converse with everyone.  This is not the time to bring up a serious conversation, mention a grave illness or ask for a job.  Super Bowl Sunday is supposed to be fun. Keep the tone light and breezy and pay attention to the ball.  Here’s a complete glossary to everything you could possibly want to know for game day terminology.


Avoid Being the Know-It-All.  You may be the type of person who thrives on knowing every minute detail about the two football teams, the players and the Tom Brady controversy. And you may enjoy spending hours researching the commercials that will be shown during the game, but that information is best kept to yourself. Today is not the day to sit on your soapbox espousing your knowledge. A know-it-all is a big turn off.


Display Good Sportsmanship.  Wearing your team’s jersey’s and caps, painting your body to show your support, showing the love by cheering them on is all perfectly fine.  What will not fly on Super Bowl Sunday is shouting expletives at the television screen when your team misses the field goal or picking a fight with your neighbor because he did a victory dance for a touchdown for your opposing team. Remember you are not playing in the game, you are just a fan.  Don’t make it personal.


Don’t Bet the Farm.  There are more Super Bowl pools than I care to imagine.  Know your limits.  If you’re an out of control gambler, designate the set amount for your bet before you leave the house so that you cannot be coerced into contributing more than you can afford.  There are plenty of pools to choose from and not all require a $500 ante.  You certainly don’t want to dip into your child’s college fund for a silly square on the football grid.


Absolutely No Double-Dipping.  As George made infinitely famous on Seinfeld, if you take a chip, you get only one dip and then end it! Rather than risk a lecture from the double-dip police, place a handful of chips on a napkin or small plate then use one large chip to scoop extra dip that you can then enjoy with the remaining chips.


Avoid Cutsies at Buffet Line.  Inevitably, there will be one coveted line with the short rib pizza or the crispy rice sushi that everyone is going to flock to. Whatever you do, please wait patiently for your turn. If you see friends further up, resist the urge to move even if they are waving you in with permission. It’s not their call and the others behind you will be most appreciative.


Leave No Trace Behind.  Be a good guest and clean up after your mess.  All those beef rib bones, leftover cold nachos, and ketchup-soaked napkins aren’t going to deposit themselves. Before making your way to partake in more witty repartee, do a complete 360 and leave no trace of trash behind.


Compliment the Chef.  Super Bowl Sunday is the second most popular eating day after Thanksgiving and food plays a major part in the enjoyment.  Hosts spend weeks preparing the special menu of finger foods typically based around the two playing teams hometown favorites. A compliment to the chef lets them know they satisfied your every need.


You Gotta Give Thanks. Of course, it goes without mentioning to make sure you thank the host before you leave and follow up with a nice handwritten thank you note the following day.  Your graciousness will not go unnoticed.


On a final note today, please watch out for taboo topics.  We are still fresh off the swearing in which took place a mere two weeks ago and many are stick licking their wounds on both sides of the aisle.  While everyone has a right to their opinion, it doesn’t give us license to shove that opinion down another person’s throat. If you don’t have something nice to say, keep it to yourself. Stay away from conversations that condemn Trump, hail Bernie Sanders, or defend Deflategate. Now go and enjoy the game!!