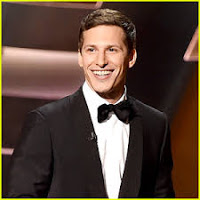 The folks at Fox should pat themselves on the back for selecting Andy Samberg to host the 67th Primetime Emmy Awards. He may not have produced stellar ratings, but he sure is appealing thanks to a combination of boyish looks, self-deprecation and an adorable delivery of razor-sharp jokes behind a giant Cheshire Cat grin. The guy who cut his chops for seven years as a cast member on SNL and won a Golden Globe for his Fox TV series Brooklyn Nine-Nine is so likable, you can’t help but smile even when he releases one of his stinging one-liners.  Whether he’s skewering Donald Trump or calling out Kim Davis, or pointing a finger at racism, ageism or wageism in Hollywood, his timing is so quick and stealthy you hardly notice the one-two punch it until it’s passed.

The comedian opened with a musical number that was both hilarious and cautionary as it poked gratuitous fun at the perils of watching too much “Must See TV”.  While it feels like you literally have to hold up in a Kimmy Schmidt type bunker to binge-watch the ridiculous number of shows, the sad takeaway is that many people would much rather spend time with their television content than engage in risky real live human connection.

On TV’s biggest night, however, we were happily glued to our television watching intently and hanging on to every word to bring you our red carpet manners recap at this year’s Emmys.

A Sea of Black on the Red Carpet. Stars showed up early on the red carpet in a color spectrum that ranged from teal on Amy Schumer and Kelly green on January Jones to canary yellow and shades of orange on actresses Heidi Klum, Mindy Kaling and Taylor Schilling. Black dresses were all the rage for Julia Louis-Dreyfus and Lady Gaga with sequins and silver showcased on Sarah Paulson, Sofia Vergara and Kerry Washington. Chain spaghetti straps made their debut draped over the gorgeous shoulders of Taraji P. Hanson and Claire Danes while new hairdos were on display on the likes of Elizabeth Moss and Amy Poehler. Lady Gaga looked fabulous in a retro bob and actresses Julie Bowen and Sarah Hyland looked sporty in their shorter loose locks.  As far as the night’s biggest fashion winner, the young “Modern Family” actress receives our vote for a classic and chic off-the-shoulder burgundy dress by Zac Posen with matching nails and minimal accessories. However, Padma Lakshmi summed it up best proclaiming that on the red carpet, “nothing looks more beautiful than a smile.”  We couldn’t agree more! 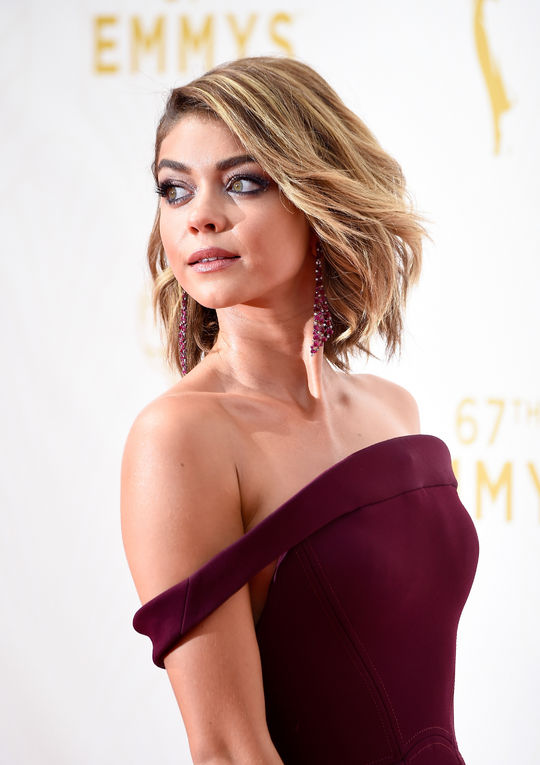 Sweat Etiquette. At 96+ degrees in downtown Los Angeles, the stars were schvitzing up a storm on the red hot red carpet. Many of the women chose frocks with breathable fabrics, but the men suffered in silence with long sleeve button-downs and wool tuxes. Apparently, Mario Lopez soaked through four shirts before reaching the theatre! Amy Schumer felt compelled to wipe the brow of Ryan Seacrest during her interview and a perspiring Allison Janney was still clutching her face blotter when she approached the stage to accept her 7th Emmy Award for Best Supporting Actress in a Comedy. 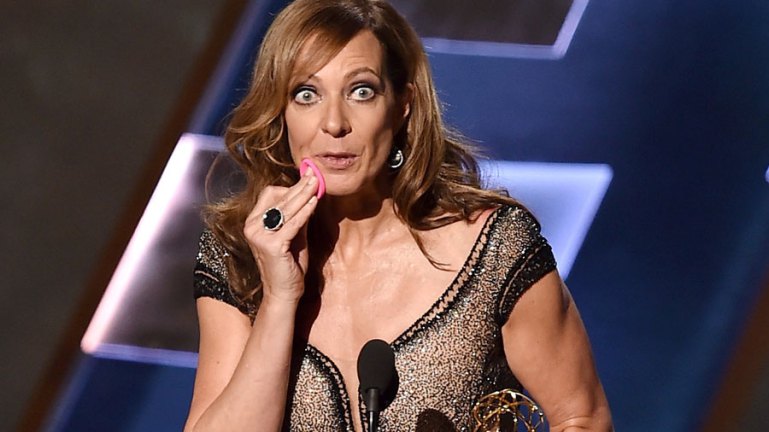 Most Concise Candid Speeches. Thankfully most winners kept their acceptance speeches concise with the most succinct speeches going to the Outstanding Comedy Writing winners of “Veep” who hilariously thanked HBO “for letting us come over here and make fun of American politics and make American money.” And, Frances McDormand who won Outstanding Lead Actress in a Limited Series for “Olive Kittridge” for a short, yet poignant speech that reminded us, “We’re all here because of the power of a story well told. Sometimes, that’s enough.”

Best Category Announcement Look. In anticipation of the announcement for Outstanding Lead Actress in a comedy, ever the jokester Amy Poehler donned aviator sunglasses and a hoodie going incognito when her category was called. She’s been down this road before so when Emmy veteran, Julia Louis-Dreyfus took home her fourth consecutive win, Amy handled it the only way she knew how, with humor and then a few fun follow-up tweets on social media. 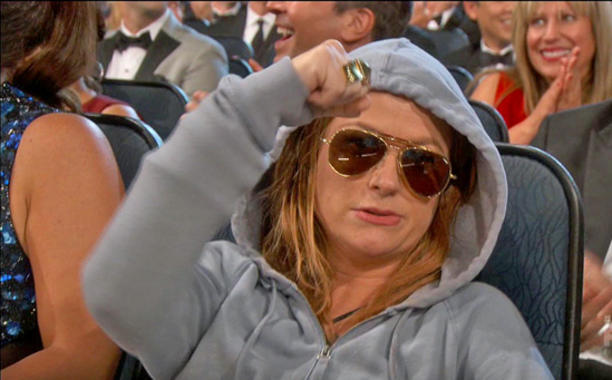 Silliest References in an Acceptance Speech.  The hysterical Amy Schumer who won for Outstanding Variety Sketch Series thanked all the people who helped her along the way, including a shout out to the girl who “gave me this smoky eye.” While Peter Dinklage who admitted he wasn’t prepared at all and was “even chewing gum” apparently kissed his wife and transferred the gum into her mouth before taking the stage to accept his second Emmy win for Outstanding Supporting Actor in the Drama “Game of Thrones.” 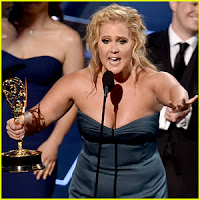 Well-Deserved Standing O’s.  Everyone was rooting for Jon Hamm to take home the Outstanding Lead Actor in a Drama Series for Mad Men so they happily stood to cheer on their fellow auteur. After eight attempts, the Emmy award was long overdue and more than well-deserved.  The actor was so grateful, he literally crawled onto the stage and gave a speech that was both heartfelt and bittersweet after the long-running series ended. The second standing ovation of the evening went to the dapper looking and still recovering Tracy Morgan who took to the stage to present the final award of the evening. It marked his first public appearance since the devastating accident which took place in June 2014 and left him severely injured. Especially thankful, he was thrilled to return to the Hollywood community and the place he calls home. 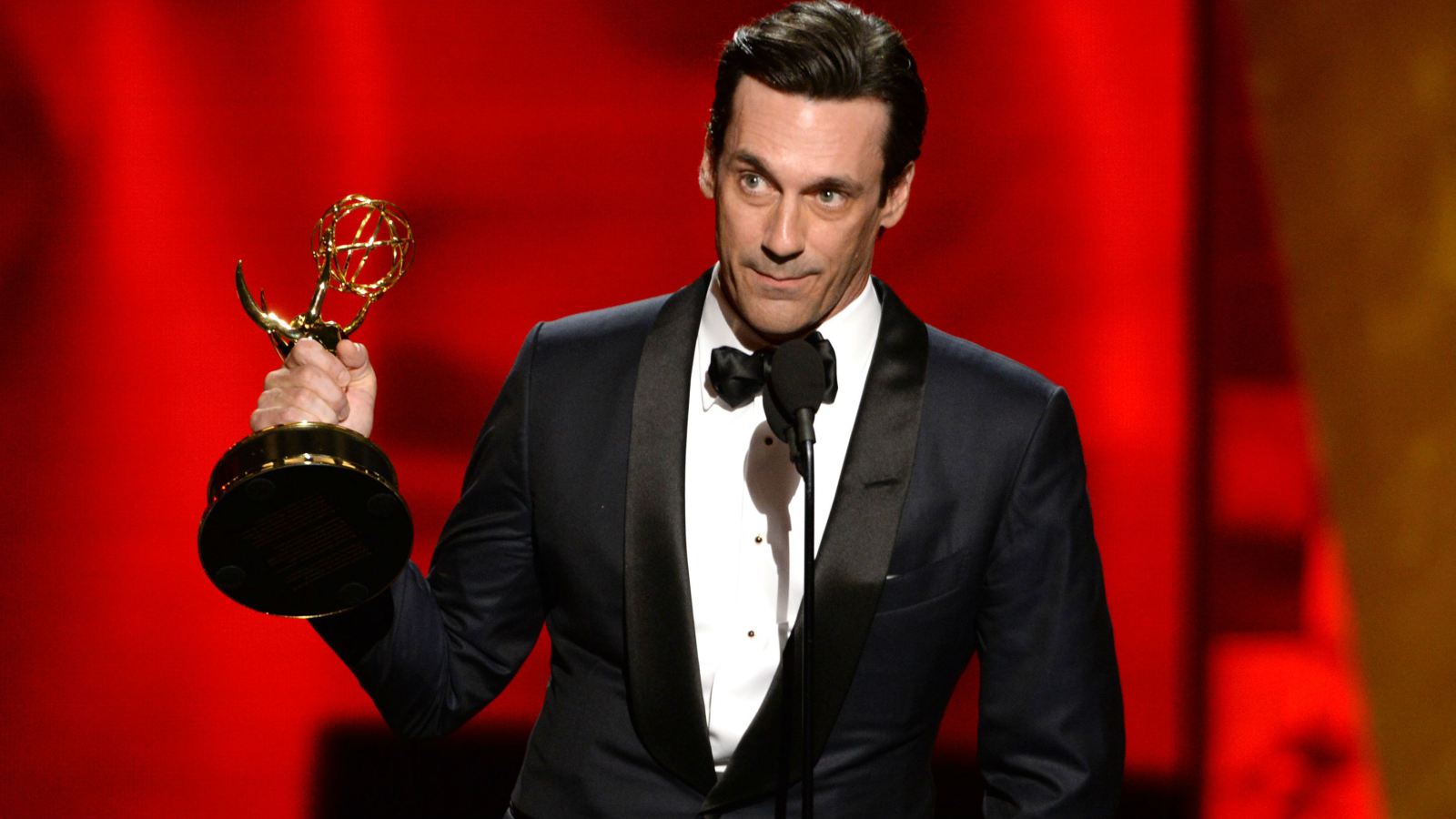 Shedding Light on Civil Rights. The two wins for “Transparent” shed important light on the modern day civil rights issue for transgender people with Jill Soloway (Oustanding Directing in a Comedy Series) urging the audience to support the trans equality bill and Jeffrey Tambor dedicating his Oustanding Lead Comedy Actor award to the transgender community.
Doing Away with Diversity.  Viola Davis’ win for Oustanding Lead Actress in a Drama for “How to Get Away with Murder” was history making as the first African-American actress to ever hold that trophy. “The only thing that separates women of color from anyone else is opportunity.” “You cannot win Emmys for roles that are simply not there.” The additional wins for African-American actresses Regina King (of ABC’s “American Crime”) and Uzo Aduba (of Netflix’s “Orange Is the New Black”) also echoed loudly. The hope is that one day we will do away with the idea of diversity and create a landscape of inclusion where all people – regardless of their race, color, sex or religion – will be celebrated and awarded equally for their efforts.