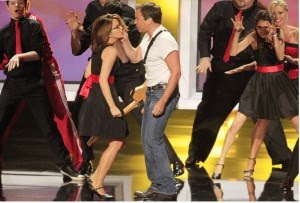 This year’s Emmys came a month early and brought with it a new babyfaced host from late night. Thankfully, the Los Angeles weather held up surprisingly well for this time of year and provided us with a day that was goldilocks perfect. The female nominees were smartly dressed in the latest trends of nudes and shades of blue with their male counterparts attempting to compete in their predominantly black tuxes. There was the usual fare of poses on the red carpet and commentators offering hand sanitizer and mints. In our opinion, a few questionable notes were January Jones’ Atelier Versace dress which was a big departure from her demure wardrobe on “Mad Men.” With her just rolled-out-of-bed hairdo and the rigidness of her dress, we thought she could have used a more endearing smile to carry off the look. We were also not quite sure where Ricky Gervais was going with his bit about the lack of alcohol at the ceremony. Was it really necessary to waste our time watching waiters serve bottles of beer to the celebs in the first 2 rows? I don’t think so. We’re just thankful that executive producer, Emily Gerson Saines’, boob did not pop out of her dress as she was accepting the Outstanding Made-for-TV Movie Award for “Temple Grandin.” We thought it came dangerously close to being a Janet Jackson/Superbowl incident. Finally, we’d like to send a special nod of congratulations to Steve Levitan for winning Outstanding Comedy Series and for citing his wife as the true inspiration for his work and the success of his hit show “Modern Family.”

After dedicated hours of switching back and forth between pre-shows and then watch the awards show itself, we have compiled our list of “Red Carpet Manners” hits and misses for this year’s Emmys.

Show Some Team Spirit. We thought “Access Hollywood” showed great effort in supporting many of the nominees by creating special moments for them on the red carpet. They went to great lengths by organizing a school pep rally for Matthew Morrison with his alma mater the Orange County High School of the Arts. They showered fellow Glee nominee, Lea Michele, with a birthday cake in a jar to honor her 24th birthday including a lit candle ready for wish making. When it came time to interview Jane Lynch, they had their camera crew noticeably dressed in Adidas track suits as an homage to her on camera role as Sue Sylvester. This is one way to guarantee the celebs stop by next time for interviews. Now that’s team spirit!

Take a Lesson in Grooming. Seal and Heidi Klum, ever the dapper and debonair couple, took to the red carpet in style once again. Dressed to the nines, no details were left uncovered including the his and her nail polish. When interviewed by the TV Guide Channel, we were reminded of Seal’s confident manner when he revealed his newly polished nails. Now we’re not talking about the buffed and clear polish some businessmen prefer, we’re speaking of a dark beige polish that complemented his skin and his suit. The interviewer seemed taken aback when Seal went on to espouse the importance of the mani/pedi and men in general developing and embracing their feminine side. Now that’s taking male grooming to a whole new level!

Make Good Eye Contact. Petite Paula Abdul needs a refresher course in the importance of good eye contact. In most of her pre-show interviews, we caught her looking down never meeting her interviewer’s gaze head on. There is something very disconcerting about someone who cannot look you in the eye. It makes you wonder if they’re really present. Paula already skates a slippery slope when it comes to making sense and we think she should be more aware of raising her head and opening her eyes. It might help her to sound more convincing.

Employ An Affable Host. There is no doubt about it, Jimmy Fallon is one likable dude. He comes across as sweet, polite, transparent and loads of fun to be around. All of this was evident Sunday night as he hosted his first Emmys. From the opening sequence of his Springsteen rendition of “Born To Run” to his medley of songs from epic shows that had ended, his vast talent and easy rapport with the audience was apparent. Not only was he a master of ceremony, he was also a master of quick change, able to whip out his guitar for an introduction or slip into a costume to belt out a song. It was a terrific casting by NBC. Kudos to Jimmy for a job well done!

Don a British Accent. Everything sounds better with a British accent. The eloquent and lovely acceptance speech, made by Archie Panjabi for Outstanding Supporting Actress in a Drama Series for “The Good Wife,” was music to our ears. This was her first nomination and win and her concise acceptance speech reminded us of the beauty and vast vocabulary we have available to us in the English language.

Deliver Acceptance Speeches Early. If at all humanly possible, try and get your awards speeches in during the initial part of the awards show. It is a fact that the first few categories have considerably more time to complete their acceptance speeches and as the show picks up steam and loses time, the music signaling it’s time to wrap up becomes more frequent. The exception, however, is Mr. Al Pacino who won for Outstanding Lead Actor in a Miniseries or Movie. We noticed the legendary actor was able to drone on and on thanking everyone from his hair and makeup people to Dr. Kevorkian without pausing and to no interruption of music. Perhaps the producer of the Emmys didn’t want to risk messing with Scarface.

Remove the Tickler from the TV Screen. We all love George Clooney and his humanitarian efforts are more than commendable, but do we need to know that he’s coming on in 17 minutes! Are we supposed to set our clocks so we don’t take a trip to the loo during that time? For some reason, in this year’s show, the Emmys felt the need to provide us with ticklers on the exact whereabouts of the celebrities and when they would be appearing on stage. I suppose for George it was a good thing we were around to see him on stage. After all he is one of the good guys who promotes (in his words), “the best version of the word celebrity.”

Hold Your Own Trophy. Perhaps Kyra Sedgwick is getting a bit bored of winning all those Emmys. This was her third year winning Outstanding Lead Actress in a Drama and it seemed like old hat. She even had the audacity to ask Tina Fey, who presented her award, to hold her Emmy so that she could put on her glasses and read her acceptance speech. Tina humorously obliged and winked at the cameras, but if I were her, I would have been a bit miffed thinking, “who is this diva and why can’t she hold her own darn Emmy?!”

Be Present to Accept Your Award. If you are lucky enough to be nominated for an Emmy (even if it is your umpteenth time), make your best effort to get to the show. In one of the biggest upsets of the evening, Conan O’Brien’s ‘Tonight Show’ lost to ‘The Daily Show with Jon Stewart’ as Outstanding Variety Series. Making matters worse, Jon Stewart wasn’t even there to accept the award along with his cast. The announcer made a joke that he was “rested on a bed of melted Emmys.” Anytime a celebrity misses an awards show, it comes across as a snub and gives the impression that they have more important things to do. If you can’t be there physically, at least have someone be your designated wingman to explain why you could not graciously accept your award and make sure the excuse is a good one!

All in all, there were no major catastrophic events to note. Everyone was fairly behaved and acted accordingly, but we would expect nothing less from television. It is, after all, supposed to be the most civilized of all the mediums, “Jersey Shore” notwithstanding.