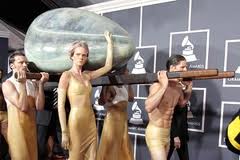 I’ve been a lover of all things music since I can remember. I had a huge collection of 45’s with all the hits and would dance around my bedroom singing every lyric word for word. As I grew older, I tried my hat as a singer for a stint during college and a bit after performing in cabaret clubs here in Los Angeles. My first internships and jobs were in the music industry from MTV and KROQ to Capitol Records and Priority Records. My musical tastes range from Classic Rock to Alternative and Rap. When I want to relax and unwind it’s with Smooth Jazz or some Light Classical. I can appreciate a good Elton John or Temple of the Dog ballad in the same way that I can get excited over the latest Jay-Z or Drake. So watching tonight’s lineup of musical superstars was not a chore, it was pure enjoyment! One thing’s for sure, musical personalities are big, brash and bold and they do not disappoint. They make for good entertainment and loads of commentary, especially, when they break the rules of decorum and don see-through or meat inspired attire. Let’s take a look at tonight’s highlights and low points as we bring you our latest Red Carpet Manners at the Grammy’s.

The Same Old Song. There was a tremendous amount of hype surrounding tonight’s performance by Lady Gaga. Arriving in an iridescent egg carried Cleopatra style, Gaga was said to be “incubating” until showtime. So when she finally cracked the egg we were expecting nothing short of spectacular. Instead, what we discovered was an updated version of a mysteriously close sounding rendition of Madonna’s “Express Yourself.” Did Gaga think of contacting the Material Girl beforehand to formally ask her permission? The whole thing just sounded a little too close for comfort. It is perfectly fine to admire one’s work, but outright duplication is difficult to forgive.

Angry Much? With eyes bulging and veins popping, you’d think Eminem had plastic surgery to keep the perpetual angry look on his face. His music is highly-regarded, but his relentless themes of hard knocks and violent acts is exhausting to watch. Does this guy ever smile? Yes, he seemed appreciative and sincere during his acceptance speech, however, I could not get over how much he resembled the crazy brother, Albee, in “Big Love.” That is one creepy fellow and Eminem is following suit. We get it, it’s part of your act, but lighten up a bit dude!
The Animals are on the Loose. MTV pulled out all the stops giving Snookie an opportunity to host on the red carpet. A rare moment found her interviewing a leopard-inspired Nicki Minaj complete with a bride-of-Frankenstein up do. With mikes in hands and mouths basically uncensored, the girls were free to banter back and forth. Unfortunately,the Jersey Shore and Queens boroughs were not far behind as they creeped into the conversation removing any trace of sophistication or class.
The Greeting Committee. The evening’s most awkward greeting went to Matthew Morrison and Ryan Seacrest during Matthew’s interview on the red carpet. Matthew went in for a shake with a simultaneous man hug that went awry and left Ryan in the awkward position of figuring out how to respond and make it look cool. The whole thing backfired in my opinion which is why we advise to stick with the simple handshake with two pumps and leave the more fancy interpretations when millions of eyeballs aren’t watching.

Easy on the Gyrating. Rihanna and Drake turned the heat way up for their performance of “What’s My Name,” which would have been great for the AMA’s or VMA’s, but the Grammy’s, not so much! The very explicit gyrating motions that Rihanna is known for pushed the limit and I am guessing that Neil Portnow, President of the Academy, received some flack for it. Don’t even get me started on Puff Daddy/P. Diddy/Diddy Money, whatever his name is this week’s introduction. Did he just get a mouthful of braces? He could hardly speak! It was a toss up as to who was a worse speaker, Diddy or Kris Kristofferson who also sounded like he had a mouthful of cotton.

Young Ambassadors. Justin Bieber and Jaden Smith’s performance of “Never Say Never” was professional, clean and polished. No profanity or crotch holding necessary, these two young talented, teenage heartthrobs are dedicated with a tremendous work ethic and drive. They are not only adorable, but they are truly positive role models for children today.
The Grammy’s are over and we are exactly two weeks away from Oscar Fever. The new young hosts of this year’s show, the lovely Anne Hathaway and equally impressive James Franco, promise to breathe new life into what can often be considered a rather stodgy and stiff affair. Looking forward to seeing you there!