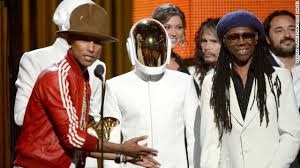 Clocking in at almost four hours, our
hats go off to music’s biggest night of the year for fulfilling on the promise
of an impactful and entertaining show. Distinctively known for its genius lineup
and pairings of musical veterans with newcomers, we were thoroughly captivated
for most of the show and that is no small feat, especially when most awards shows are snoozers.

The twenty-one performances covered
the gamut from the controversial opening number of “Drunk in Love” by husband
and wife darlings, Beyoncé and Jay-Z to the feel good medley of “Get Lucky” and “Another Star” performed by Pharrell Williams, Daft Punk and the legendary Stevie Wonder. An uncharacteristically asexual performance was delivered by Robin Thicke joined by the
band Chicago, and an exhaustive, acrobatic solo performance was mastered by the fabulous Pink which then segued into a duet with FUN frontman, Nate Reuss. Our personal favorite was the adrenaline  charged collaboration of Kendrick Lamar with
Imagine Dragons performing a combo of their hits “m.A.A.d City” and “Radioactive.”
The rapping at breakneck speed, coupled with the pounding of giant drums all
united under a cloud of exploding pink smoke left us utterly riveted. And, we
have to give props to Beatles surviving members Paul McCartney and Ringo Starr
for fifty years of music together.  Now
that is quite an achievement!
Aside from making musical history, this
particular Grammy’s will forever be memorialized as the first ever awards show
to publicly embrace gay marriage in a fitting gesture that gathered
thirty-three gay and straight couples of varied race and religion for a giant
wedding ceremony presided over by Queen Latifah. Of course, the show was not
without its flaws and noticeable hits and misses.  Here are our red carpet manners moments gleaned
from this year’s Grammy’s.
Fashion
Sense.  Female artists Pink, Katy Perry and Taylor
Swift receive special nods for rocking the red carpet in high fashion. Pink
looked flawless in a form fitting strapless red (not pink) gown by designer
Johanna Johnson. Katy Perry took her music literally with a Valentino Haute
Couture dress that featured musical notes from an Italian opera song. Taylor
Swift sparkled and shined with a gold Gucci ensemble that complemented her delicate
frame perfectly.
Fashion
(Non)Sense.
Helmets and hats were the chosen accessory at this year’s Grammy Awards.  Most recognizable were the gold bling helmets
adorned by French duo Daft Punk. Coming in with a close second was Pharrell Williams wearing
a Vivienne Westwod hat that resembled a forest ranger and
prompted the Arby’s restaurant chain to take to social media and ask the question, “Can
we have our hat back?” Other distracting elements included Madonna’s cane which
seemed to serve more for balance than looks, and Lorde’s black dip-dyed fingertips which can only be described as
creepy and threatened to give us nightmares.
Shouldering
a Social Agenda.
While a great many lauded the Grammy’s for staging a massive wedding in honor
of Macklemore & Ryan Lewis’ “Same
Love” which supports the movement to legalize gay marriage, others
argue that awards shows should not be used as platforms to publicize agendas,
political or otherwise. Many celebrities have used such media events to air their
personal views and beliefs and they have been chastised for it.
A
Social Message with No Agenda.
The beloved Carole King has finally been given her just due as both the
recipient of the  MusiCares 2014 Person of the Year and the
subject of “Beautiful” a smash hit on Broadway that tells the tale of her
remarkable rise to stardom.  Sara Bareilles is no slouch either.  Her hit song, “Brave” is already becoming an
anthem for anyone facing an adversity or challenge.  Together these ladies promote positive messages of confidence
and empowerment.

Bewitched,
Bothered & Bewildered.  Katy Perry’s
performance of “Dark Horse” in which she conjured up images of demons and other
satanic symbolism left the Christian community and many viewers a little
shocked and wondering whether they just witnessed live witchcraft.  Beyoncé’s sexually charged opening number was
not as appealing as she may have hoped. Her body looked amazing, but to watch
the married mother of Blue Ivy twerk and grind like she was in a strip club left
us slightly bothered and uncomfortable. We were perplexed and bewildered by pop
maven Madonna who was clearly off her game. She just didn’t look well and
frankly she didn’t sound well either. Her rendition of “Open Your Heart” fell
flat in comparison to Mary
Lambert’s spirited vocals.

A Speech Worth Its Praise. Macklemore turned in the most heartfelt speech of
the evening remembering to thank the fans, his fiancé and all of the people who
supported him along the way.  He was
genuinely honored and grateful for his multiple wins, and even went so far as
to take to social media to reject their win for Best Rap Album stating that the
award should have been given to a more deserving Lamar Kendrick.

Unexceptional Acceptances. Hands down this goes to the French helmeted twosome
who were literally unable to utter one single word each time they took to the
stage to accept their Grammy’s. Instead we were left to a helpless Pharrell who
struggled to come up with a few eloquent sound bites.  Lorde also deserves an honorable mention in
this category for her lack of expressiveness. The audience yearns for emotion and humility during these speeches and when the artist doesn’t deliver, we’re left with a feeling of emptiness.