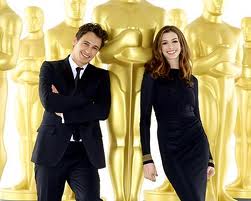 Goodbye Bieber fever, tonight was all about Oscar fever! The pinnacle of awards shows arrived to crisp clear skies after a couple of days of freezing rain and in some parts SNOW here in Los Angeles. We’d been hearing for weeks about Anne Hathaway and James Franco’s gearing up for Oscar hosting and couldn’t wait to see what original fare they had up their sleeves. The start of the show featured a montage of the two stars in many of the year’s biggest films á la Billy Crystal. Coincidentally, Mr. Crystal wound up joining Anne Hathaway on stage to pay tribute to Bob Hope who apparently had hosted the Oscars for 18 years straight! Anne and James went on to find their groove as the night progressed poking fun and having fun with each other maintaining a rather light and breezy tone.

This year’s awards show promised to be better than ever, engaging audiences both old and young with a slightly hipper and cooler feel. It was also being touted as one of the most interactive awards shows in history taking advantage of new social media tools such as Twitter and Facebook and streaming live video to keep audiences up close and personal. The official theme for the evening was “You’re Invited” and I think the young hosts did a great job of making all of the nominees, presenters and other guests feel warm and welcome. Here are the “Red Carpet Manners” highlights that left the biggest impression.

Young Host Chemistry. For a first effort and for being the youngest duo to host the Oscars, Anne Hathaway & James Franco tried their best to make it look effortless. Whether they had the best chemistry or were actually “besties” (as in best friends) remains to be seen. Although they were splitting duties, Anne really held the show together with her upbeat energy, huge smile and thrilled-to-be-here attitude. James was not quite as accessible and often appeared to be looking off into the distance rarely making eye contact with his fellow host. Nevertheless, he was a good sport and gave the evening a couple of good laughs when he dressed in a white unitard for a spoof on the “Black Swan” and when he appeared onstage in a full-length pink gown and blonde wig. Anne was charming and showed off her singing chops as she brought the house down while belting out a familiar Broadway tune. She donned seven different outfits for the occasion and confidently smiled and laughed her way through the show.

Dropping the “F” Bomb. Not even a solid 30 minutes into the show, the party loosened up quite a bit when winner for Best Actress, Melissa Leo, in all her excitement, accidentally dropped the “F” bomb. Luckily the producers saw it coming and were able to bleep out the expletive in good time. The accidental blurt went on to become a topic of conversation for many other winners throughout the night from David Seidler to Christian Bale. The sound bite will go down in Oscar history and is guaranteed to be remembered for years to come.

Demand Respect. Aaron Sorkin picked up the win for Best Adaptation of a Screenplay for “The Social Network” and thanked a laundry list of people including all those who had worked with him over the years, his parents, director David Fincher, Sony, Scott Rudin and the cast and crew of the film. Before he concluded, he gave a shout out to his daughter, Roxie, and insisted that her guinea pig finally show him some respect (now that he was an official Academy Award winner!)

A Night for Late Bloomers. David Seidler, who won the Oscar for Best Original Screenplay, and who was a former stutterer himself, spoke eloquently thanking his children, the producers, the director, the cast and Her Majesty, the Queen for not putting him in the tower of London for using profanity. He accepted the award on behalf of all the stutterers in the world exclaiming, “We have a voice, we have been heard thanks to you, the Academy.” A meaningful moment for all those who suffer from speech disorders.

Accidental Blurts or Intentional Blunders. In addition to Melissa Leo’s fumble, a few others took a spill. Here are our top few: Christian Bale exclaiming, “Bloody hell, what the hell am I doing here?” upon winning for Best Supporting Actor. James Franco calling the winners of the Scientific and Technical Awards, “nerds” during his hosting duties. Anne Hathaway flubbing her lines as she introduced Sandra Bullock and then advised the audience to “take a drink at home.” Her professionalism just flew out the window.

Leave Your Cheat Sheet at Home! The Academy went to great lengths to make sure that the nominees were well-prepared for their acceptance speeches. Tom Hanks narrated the DVD’s that were sent to each nominee specifically mentioning to leave the little white pieces of paper at home. Apparently, Colleen Atwood, winner for Best Costume Design and NYC filmmaker, Luke Matheny, winner for Best Documentary must have mistakened the DVD for junk mail and tossed it into the garbage. Poor Mr. Matheny should have taken his own advise to get a haircut. He looked like a shaggy dog.

Check Your Sea Legs. As expected, Colin Firth, gave one of the most articulate acceptance speeches of the evening, but not without making several hysterical references having to do with butterflies in the stomach and uncontrollable dancing legs. He expressed his gratitude and received a few hearty laughs for touting himself as an early child sensation and for his fleeting delusions of royalty. When it seemed as if he couldn’t contain his excitement any longer, he politely said to the audience, “If you’ll excuse me I have some impulses I have to attend to backstage.” With the British, courtesy always comes first.

Honorable Mention. We must take this opporunity to say that Miss Natalie Portman fully redeemed herself last night by delivering a polished and poised, emotional acceptance speech. She has had an amazing year and we wish her every happiness!

Oscars 2011 ended with a rousing rendition of “Somewhere Over the Rainbow” sung by the P.S.22 Chorus students from Staten Island who flew all the way out to Los Angeles for the show. It was a tug at your heartstrings moment that kicked into high gear when all of the night’s winners were invited to stand on stage with their Oscars and join in the chorus. It was one big happy family and you could just feel the love in the room.

Beverly Hills Manners offers a variety of etiquette classes for both children and adults. The next available class is “Young Ambassadors Etiquette” (for children) to be held on Saturday, March 12, 2011 from 10:00 am until 1:30 pm at the Beverly Wilshire, a Four Seasons Hotel. For reservations, please contact Lauren Breuning at 310.858.2382 or [email protected]