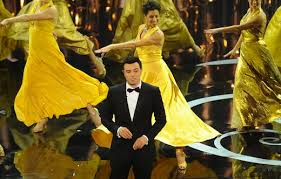 I’ll begin by saying that I’m not
particularly a fan of Family Guy and
I never saw the movie Ted so I wasn’t
expecting much from this year’s Oscar host, Seth McFarlane, other than I was imagining
the worst, something along the lines of Ricky Gervais, but even more crude.  I would’ve never guessed that the man behind
such irreverent and profane humor would actually appear rather dapper dressed
to the nines in an elegant black tux and donning a beautiful smile and great
posture.  I had absolutely no idea he was
a wildly talented song and dance man who had performed at both Carnegie Hall
and London’s Royal Albert Hall and been nominated for two Grammy’s!  So when he launched into his first song, “We
Saw Your Boobs,” however ridiculously inappropriate the subject matter, I was
impressed with his vocal and production chops. I was further mesmerized by his commandeering
presence on the stage clapping vigorously and jumping right in with his hosting
duties after each musical cue. His jokes, although sometimes dipping into the
dangerous – the Chris Brown and Rihanna mention was a specifically low jab –
garnered a steady stream of laughs from the audience.
That being said, there is no way
around the fact that the show ran long clocking in at three and a half hours
exactly.  And we’re not just being
literal here.  The monologue, which contained
some witty one liners,
started to become monotonous. The William Shatner “Star Trek” and Sally Field “Flying
Nun” references I could have done without.
However, the skit with sock puppets poking fun at the
movie “Flight” was absolute genius!  The banter among the presenters seemed to
drone on a bit long. Note to the Avengers cast, Paul Rudd & Melissa
McCarthy: Were you supposed to improvise or was it scripted? And, the song and
dance numbers began to border on wearisome. Did we really need to see dancing
from Joseph Gordon-Levitt and Daniel Radcliffe and was the final number with
Kristin Chenoweth to celebrate the losers truly necessary?  Apologies in advance to the producers, Neil
Meron and Craig Zadan.  I don’t mean to
offend. You are undoubtedly two talented guys and I do love Smash, but the show clearly could’ve
been edited down.  I was worried about
the poor starving female nominees, presenters and winners in their fabulous
dresses who were already withering away when they arrived!  They must have been salivating at the thought
of Wolfgang Puck’s creations and what they would soon be devouring at the
Governor’s Ball.
Now on to the
awarding of the Oscars themselves.  It
was a spectacular year for movies with a total of nine films up for Best Picture
alone.  What was noticeably different was
that there was not one clean sweep for any one picture, but that the wealth was
spread amongst the top contenders.  While
Ben Affleck was snubbed for Best Director, his biopic, “Argo,” won for Best
Picture as well as Best Adapted Screenplay.
The Best Director nod went to the extraordinarily imaginative Ang Lee
for “Life of Pi.”  Best Actor, Daniel
Day-Lewis, gave “Lincoln” a nice affirmation as did Best Actress, Jennifer
Lawrence, for “Silver Linings Playbook.”
The Best Supporting Actor and Actress roles went to frontrunners, Christoph
Waltz and Anne Hathaway for their steady portrayals in “Django Unchained” and “Les
Misérables.”  Our recap wouldn’t be
complete, however, without our red carpet manners commentary encapsulating the most
noticeable moments of the night. Here they are.