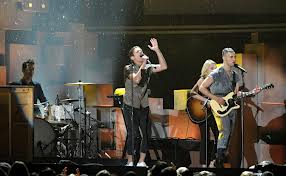 The 55th Grammy Awards started with a circus
spectacle by the lovely Taylor Swift and ended with a rowdy tribute by the host
and rapper, LL Cool J, with a little help from Beastie Boy Chuck D.  But the most noteworthy acts of the Grammy’s three
and a half hour long show were the stripped down, raw and emotional
performances that were sprinkled in the middle.

The band, Fun, whose anthem-like rendition
of “Carry On” executed on a simple stage with pouring rain and talented
musicians, set the tone for the evening that hard work and perseverance really do
pay off.  Bordering on the intense and definitely
more restricted than we are accustomed to, Rihanna’s soulful delivery of her new
single “Stay” alongside Mikky Ekko, was gut-wrenching, especially if you picture
her singing this song to former-turned-current beau, Chris Brown.
No lip synching allowed here.  The Grammy’s adhere to a strict policy that all
artists must perform live.  This may
explain why many of the performers selected songs sans movement.  This is a welcome change from the typical fan
fair we are used to seeing on stage that is often more distracting than
entertaining.
In comparison to other music awards
shows, the Grammy’s are known for their elegance and sophistication
continuously trying to pay homage to the old guard while nurturing the ingénue.  This is evident in their musical pairings
which this year did not disappoint.  Couplings
from Elton John and Ed Sheeran, Sting and
Bruno Mars, Black Keys and a New Orleans band of
jazz musicians and Mavis Staples with the lead
singer from the Alabama Shakes, will go down in history as classic Grammy
moments.
What else did we
notice?  Of course, we have a few red
carpet manners passes and violations to hand out.  Here they are in no particular order.
Wardrobe Misdemeanors.   CBS, the
network hosting the Grammy’s, issued an explicit advisory in advance stating, “Please be sure that buttocks and female breasts
are adequately covered. Thong type costumes are problematic. Please avoid
exposing bare flesh under curves of the buttocks and buttock crack.”  While they made their best efforts, ladies
who couldn’t help themselves included Katy Perry who looked like her breasts
were permanently glued into her dress and Rihanna, who dressed elegantly for her
ballad, but then changed into a bosom-peaking top for her tribute to Bob
Marley. Presenters J.Lo and Kelly Rowland also decided to ignore the guidelines by bearing too much leg and revealing more than a comfortable amount of skin.
Sophisticated Gents.   There
were a number of men, however, that were looking rather elegant for the affair.  Black suits and separates in a variety of styles with tasteful gold accessories or gold bling depending, seemed to be the
uniform of choice.  Our favorite crooner Justin
Timberlake and the always dapper Jay-Z held the standard.  I would expect nothing less from the duo who
lent their talents to a song entitled, “Suit & Tie.”  R&B artist Miguel and rapper Wiz Khalifa inspired their own street takes while Bruno
Mars, Sting and Adam Levine garnered dressed down versions.
Cheerful Cheerleaders.  Once her opening number was completed, the
perpetually cheerful Taylor Swift was seen flailing about, clapping and singing
her way throughout the Grammy’s.  It’s no
surprise that music worshiper, Ellen DeGeneres, would be singing and dancing in
the aisles as well, displaying her love and support for her favorite artists. Kelly Clarkson must also be included.  She is fiercely talented and so comfortable in her own skin that she inspires everyone she meets.
Questionable Acceptance Speeches.  Frank Ocean was the newcomer underdog and he
may have not been expecting to win, but his handlers might have suggested
preparing a speech just in case.  Instead,
we were treated to some muttering about picturing the audience naked followed
by a quick thanks.  Adele’s speech for
Best Pop Solo was also a bit too casual for our taste.  Yes, she won oodles of Grammy’s last year,
but a little more gratitude and graciousness this year would have also been nice.
Lead singer, Nate Ruess. of Fun opened up his acceptance speech for Best New Artist with the unforgettable
lines, “I gotta pee so bad.” Thanks for sharing.
Ladies Who Chew Gum.  The camera happened to pan on Adele once
again chomping on a wad of gum in her mouth while watching in the audience.  She may need a gentle reminder that the camera has eyes whether you are on stage or off.  I was surprised,
however, when we also caught blues maven, Bonnie Raitt, in the action.  I suppose we should just let it go and be happy knowing these
ladies like to keep their breath in check.
Good Time Guys.  I want Justin Timberlake and Bruno Mars at my
next party!  These guys don’t have to
brood, they just smile and the world is their oyster.  They know how to own the stage and have an
awesome good time!   They are charming and convincing.  JT was out of the picture for a while, but
has come back in full force complete with his own orchestra.  I loved the throw back to the days of the big
band and lead vocals.  I can’t wait to
hear the new album in its entirety.  Bruno
Mars is no slouch either.  He owned the stage with his latest hit “Locked Out of Heaven” blending
perfectly in sync with Sting and then invited Rihanna and Ziggy Marley to
participate in a vibrant tribute to the legend Bob Marley.
Most Humble.   Accepting an award for Record of the Year from an
icon like Prince is a dream come true and that’s exactly how Belgian-Australian singer Gotye and New Zealand singer
Kimbra felt when they accepted the award for their breakout hit, “Somebody That
I Used to Know.” Their humble wishes sending a warm thanks to all musicians
and ending with a resounding “Cheers!” left everyone feeling appreciative just
to be in attendance and that is exactly how it should be.