The Royal Wedding – An Event to Remember 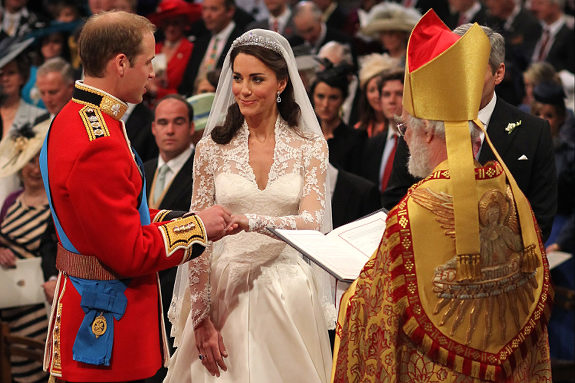 I distinctly remember watching the royal wedding of Princess Diana and Prince Charles on “The Today Show” with my mother and sister one morning before school. I knew it was a grand event recognized by the whole world, but it had no particular meaning for me personally. Years later, as I viewed the royal wedding between Prince William and Katherine Middleton in the wee hours of the morning, I was struck by the amazing camaraderie and the incredible union that these two young people shared.
Having just celebrated 13 years of marriage to my husband, I hung on to each and every word uttered by the remarkable Bishop of London’s Sermon. I felt the warmth and friendship that they exuded towards one another. And, despite the very public viewing from the estimated 2 billion people who were watching, it seemed as if I was participating in a very private event that would forever shape the future of the monarchy.
The overall tone of the event was nothing short of spectacular. Of course, there was the expected pomp and circumstance of ceremony and tradition, but there was also a great deal of ease and accessibility that completely endeared us to Kate and William that we have not witnessed prior to this modern royal couple. In fact, it is these very attributes that directly relate to the essence of manners and etiquette in today’s world. Rather than viewing two individuals who appeared stiff, unapproachable and out-of-place, the frequent words used to describe the royal couple today were overwhelmingly natural, relaxed, smiling and confident.
Glitz and glamour were put aside to usher in simplicity and impeccable taste. From the gorgeous English field maple trees which lined the aisle of the Abbey leading to the alter to the symbolic significance of the floral bouquet which contained a mixture of flowers including Lily of the Valley, Sweet William, Hyacinth, Ivy and Myrtle, every detail was carefully and meaningfully applied.
The light shone brightest on Kate Middleton who, dressed in a breathtaking Sarah Burton gown adorned with a gorgeous jeweled crown loaned by the Queen, was a walking embodiment of grace and calm. She had a natural poise and elegance that emanated as she walked down the aisle of Westminster Abbey. The happiest man on earth must’ve been Prince William who was strappingly dashing in his own right and who would have made his mother, the late Princess Diana, extremely proud.
I raise my glass to William and Kate, the new Duke and Duchess of Cambridge. Here, here!!