“Talent, Not Tanning, Is the Winner in the End” – Red Carpet Manners at the 2011 Golden Globes 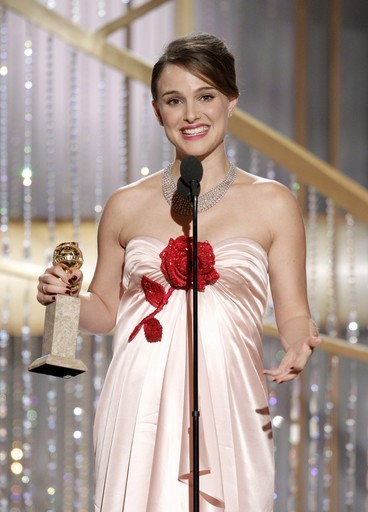 The Hollywood Foreign Press Association’s prestigious 68th Golden Globe Awards were held earlier this evening under glorious California skies, kicking off the height of awards season. As always, this event delivered the glitz and glamour, bestowing the best and brightest with accolades for ability and talent. Nowhere on this list did we see nominees from the cast of “Jersey Shore” — or any other of today’s insanely popular reality shows for that matter. They are considered too low-brow for this audience. The Globes, on the contrary, have a rather refined feel to them, featuring invitees comprised of a bevy of international stars and Hollywood royalty. The celebrated occasion was held at the Beverly Hilton Hotel which provides one enormous space for the show itself, as well as the many privately hosted parties for the attendees that follow. In a town that is typically enthralled with the salacious cast of “The Jersey Shore,” whose recent MTV ratings of 8.7 million viewers was its biggest in history, it was nice to take a moment to honor quality performances such as that of Colin Firth in “The King’s Speech.” Tonight Hollywood, and the rest of the world, took pride in recognizing talent, not tanning, and praised classical training, paying your dues and good old-fashioned hard work as evident in so many of the night’s winners.

That said, the evening had its share of uncomfortable moments and awkward jokes mostly brought on by its appointed master of ceremonies, British comedian Ricky Gervais. Thank goodness the champagne was flowing to make sure all was taken with a grain of salt and no egos were seriously hurt. Below we have compiled our best and worst “Red Carpet Manners” from posture and language to acceptance speeches and self-deprecating humor.

Hands in Pockets. We noticed more than a fair share of our young male celebs with their hands glued to their pockets while being interviewed on the red carpet this year. Jake Gyllenhaal, Mark Salling, Scott Caan, Jesse Eisenberg and Justin Bieber were just a few of the offenders. We’re not sure if they were trying to keep their hands from perspiring from nerves or to look cool, but hands in the pockets are typically a no-no. First of all, hands should be accessible to greet one another with a handshake and secondly, hidden hands tend to give an appearance that one is nervous or uncomfortable or worse that they might be hiding something. In the future boys, your hands should be visible and used to make gestures. This will assert confidence and control.

Fig Leafs. Our ladies also fell victim to the unappealing fig leaf position with their hands clasped below their waistline in the front. The fig leaf posture is a closed body position and tends to round the shoulders and create a slouching appearance. This also sends a non-verbal message that suggests a certain insecurity with their environment. I’m sure Olivia Wilde and Claire Danes, who are both gifted actresses and happened to look stunning in their respective dresses, would prefer to have their outer beauty encapsulate their inner confidence and strength.

Hair Uprising. The hair coiffing memo must have missed the following celebs who looked like they either were shipwrecked on an island for several months without a hair salon in sight or they accidentally stuck their finger in an electrical socket before departing for tonight’s festivities. Please don’t get us wrong, we absolutely love their acting abilities, but Christian Bale and Robert Downey Jr. were both due for a much needed haircut and Annette Bening and Scarlett Johansson needed to take it down a notch with their individually interpreted wild hairdo’s.

Globe Glamour. We would like to congratulate the following celebrities for whom we felt hit all the right marks both on the red carpet and during the show. Anne Hathaway, Lea Michelle, Julianne Moore, Sofia Vergara, Diane Aragon, Jennifer Lopez, Piper Perabo, Jane Fonda and Miss Golden Globe, Gia Montegna all displayed elegant posture, classical beauty and warm smiles while conducting professional interviews and communicating eloquently with pleasant language.

Decolletage Gone Wild. Christina Aguilera and January Jones were the most distracting for us. At one point we even noticed Ms. Jones adjusting her “girls” and helping them back into her dress as she stepped out of her limo and on to the red carpet. Ms. Aguilera seemed to be overwhelmed by her bosoms as they appeared to lay out like a tray from underneath her chin. Decolletage, if it is revealed, should be tasteful. Neither of these women went in that direction nor did they knock us over with their sweet and charming personalities so unfortunately this was all we had to focus on.

Language Barrier. We noticed many a celebrity who could use a little coaching on their language and interviewing skills. It is very hard to watch these beautiful women in gorgeous gowns open their mouth and speak and as if they are in a pool hall. You would think they would heighten the charm to match the elegance of their dresses. For us the language sounded harsh and too casual. Olivia Wilde, January Jones, Emma Stone, Kaley Cuoco and Sarah Highland were the most noticeable in this category. On the flip side, we couldn’t help but be engrossed in whatever co-host Alexa Chung had to say as she interviewed the arrivals on the red carpet. For us, the British accent just makes everything sound more lovely.

Questionable Hosting Duties. Ricky Gervais announced on the red carpet that he would walk the line and stay clear from getting too close to the edge with his banter as he reprised his hosting duties for the Golden Globes. We’re not so sure he succeeded! With a beer placed visibly on the podium at the beginning of the show and a rant of jokes that included everything from Charlie Sheen, “The Tourist”, Cher, “Sex & The City 2”, Scientology, obesity, Jews and the President of the HFPA, we rather agree with Robert Downey Jr.’s take that his hosting commentary had been “hugely mean-spirited with mildly sinister undertones.” After he finished bashing practically everyone who he introduced to present an award, he then tried to redeem himself at the end of the show by saying it has been an amazing year in movies and then thanked everyone in the world for being good sports. A little too late I think!

Acceptance Speech Analysis. Award shows are much more polite at the beginning allowing their winners to go on tangents thanking everyone and their grandmother. Christian Bale was the lucky one this year as he was able to take his sweet time accepting his award for “The Fighter” without the music playing him off. For some reason, we also noticed that Al Pacino was able to speak at length during his acceptance speech for “You Don’t Know Jack.” We have no clue what happened to Robert DeNiro who is considered one of the greats, if not the greatest actor of his time. His acceptance speech for the Cecil B. DeMille award seemed like it was written by the writers of “Funny or Die” and just seemed to miss on so many marks. We appreciated Aaron Sorkin, who won the award for Best Screenplay and offered sage advice to his daughter telling her to admire the strong female professionals in the room and assured her that “smart girls have more fun,” and were moved by Chris Colfer’s acceptance speech for Best Supporting Actor in “Glee” as he stood up to end bullying and sexual discrimination with a defiant “screw that kids!”

Baby Bumps. Natalie Portman and Jane Krakowski were both glowing on the red carpet. Ms. Portman, typically the pinnacle of refinement, kept herself together for most of the red carpet moments and during the show until she won the award for Best Actress in “Black Swan”. She then transformed into a giddy school girl saying hello to her Grandma Bernice and telling her to have a drink and then went on to gush about fiancé Benjamin Millipied saying how he really did want to sleep with her!! Uh oh, a little too up close and personal we think!

Final Comments. Attendees take note, when the show goes to commercial the cameras are still on. We noticed Angelina Jolie fixing Brad Pitt’s bow tie during one commercial outtake and then putting on lip gloss in another and Johnny Depp chomping on his gum during the commercial break. Finally, we loved Michael Douglas’s quote as he noticed the sea of celebrities standing and cheering him onstage after recovering from throat cancer earlier this year, he exclaimed, “there’s gotta be an easier way to get a standing ovation!” We agree Michael. Here’s to continued good health!!!

Lisa Gache is the owner of Beverly Hills Manners, Inc.