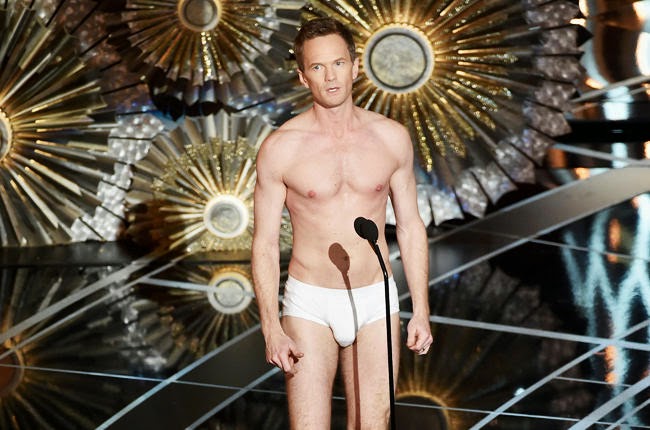 A much anticipated hosting gig by
Neil Patrick Harris was largely superseded by an emotionally and
politically charged plethora of winners with meaningful messages.  The emcee made famous for his star turn as
host of the Tony’s and Emmy’s, had a tougher time with Oscar pouring through a
steady stream of jokes many of which fell flat. Typically quite confident with a song and
dance routine, this show opener was thankfully resuscitated by a much needed Jack Black
who added range as well as levity.  NPH’s most
memorable moment may have been his most raw stripped down to his skivvies in a
nod to Best Picture nom Birdman.  Taking
the stage and revealing a very fit physique in nothing but a pair of tighty
whities, he begged the biggest question of the evening – was he or was he not
packing?  In an interview on Live with
Kelly & Michael, it was revealed that an extra pair of undies were sewn into
the fabric lest the shining stage lights reveal too much of his anatomy. Great excuse,
but we’ll buy it. Much less notable were his awkward riffs in the audience with
Steve Carell and the seat fillers. It’s hard to improvise with two million people
watching! Known for his magic tricks, we thought the bit with the briefcase
would have more punch. Instead, we were left bored and perplexed as he gave
detailed instructions to Octavia Spencer on how to properly guard the goods
containing his personal Oscar predictions.  When the big reveal arrived at the end of the evening, it was an accordion
fold recap of the night’s events. Clever, but more of a poof than a bang. Sadly, this is par for the course in the biz,
they build you up only to tear you down. NPH has been the host with the most
with an amazing run, but nothing lasts forever.

Red Carpet Fashion Favorites & Those We’d Forgo.  We’re always so excited to see what will
unfold on the red carpet, but this year’s Oscars pulled out more misses than
hits, at least on screen.  Too many of the
gorgeous beauties did not radiate in their usual manner. Actresses like Reese
Witherspoon, Patricia Arquette, Viola Davis and Kerry Washington were sorely
lacking in their blah ensembles.  Similarly
to the Globes, red made a major appearance on the carpet with dresses adorned
by Dakota Johnson, Rosamond Pike and Sophie Hunter.  Red was also showcased by Lady Gaga, Nicole
Kidman and Idina Menzel who donned red gloves, a red belt and a red top
respectively. Even David Oyelowo got
into the action with a Burgundy suit.  Short
slicked-back hair was showing chic by the lovely Faith Hill and Scarlett Johansson.  Cut out designs were a favorite with Naomi
Watts and Lupita Nyong’o and bold statement necklaces added drama to Viola Davis,
Scarlett Johansson and Cate Blanchett’s formal gowns.  Biggest hits in our book were the eternally
impeccably dressed J. Lo along with Rosamond Pike, Naomi Watts and Sienna
Miller in head turning looks that fit their frames. Oprah pulled out all the stops
in a blush number that hugged in all the right places. Two-tone tuxes were all
the rage for Michael Strahan, Eddie Redmayne, Kevin Hart and NPH who wore one during his many outfit changes.

Speeches that Left Us Speechless.  It was the night of sobering speeches that
began with an earnest J.K. Simmons who won
the first award of the evening for Best Supporting Actor in Whiplash. After
appropriately thanking his wife and kids, he then pleaded with children
everywhere to call their parents in favor of texting or emailing them.  Patricia Arquette accepted her Best
Supporting Actress Award for Boyhood and then launched into a political
campaign defending women’s equal rights and wages garnering cheers from females in the audience, especially megastars J. Lo and Meryl
Streep.  Julianne Moore’s win for Best
Actress in Still Alice shed a much needed light on the devastation of Alzheimer’s disease. Graham Moore, Best
Adapted Screenplay winner, brought attention to teen suicide inspiring young teens
to stop taking their lives in favor of staying weird and hopeful. And, the most eloquent
speech of the evening came from a humble Eddie Redmayne who accepted the Best
Actor award for The Theory of Everything winning the hearts of the audience for
his portrayal as the suffering Stephen Hawking crippled by ALS. Holding on tightly to his Oscar, he pledged to do everything in his power to help fight the debilitating disease.

A Trip to
the Stage.  The single biggest fear of
most nominees is the worry that they will trip and fall on their way to
receiving the big award.  Jennifer
Lawrence famously fell ascending the steps to accept her award for Best Actress in Silver Linings Playbook last year and then quickly laughed it off. This year, we noticed a couple of
minor tripping incidents both on and off the stage.  J. Lo almost had a major accident exiting the
stage after presenting an award and one of the winners for Best Documentary
Short nearly lost his footing as he ran excitedly down the aisle to collect his
award on stage.

Scruffy is
the New Smart.  A lack of manscaping
was prevalent at this year’s awards show with many opting for the scruffy
less-than-manicured look bearing unshaven necks a la Channing Tatum or
full-fledged hairy beards like Matthew McConaughey. The otherwise handsome
Mexicans from Birdman made a statement with their wiry, unruly locks of hair
going for a sultry suave look.

Best Blatant
Ignore of Exit Music.  Awards
etiquette rule 101 is keep your speech short and sweet lest you run the risk of
being played off by exit music. This show
seemed particularly bias with the music coming on fast and furious for certain
winners and failing to appear at all for others.  Best Foreign Film winner, Polish director Pawel
Pawlikowski, disregarded the music altogether
plowing through his speech well
until the full orchestra was sounded.

Chomping at
the Bit.  A ‘just grateful to be there’ Michael Keaton was either feeling the jitters or worried about bad breath as he
chomped away on his chewing gum for most of the show. Every time the camera
panned the audience with a mention of Birdman, Mr. Keaton was featured chewing
like a cow.  Mints are a much better
choice next time, my dear.

Monumental
Musical Performances.  One of the
most emotional moments of the evening was dedicated to the movie Selma.  Winner for Best Original Song ‘Glory’, Common
and John Legend brought the entire Dolby theatre to its feet complete with
tears streaming and a rousing standing ovation. Second to ‘Glory’ was an astonishing
rendition of ‘The Sound of Music’ by Lady Gaga.
Not an easy song to sing, her tribute to the film’s 50th anniversary culminated
with Dame Julie Andrews taking to the stage herself and another standing ovation.
A Hug it Out
Moment. What might have turned out as a cute amends resulted in a rather awkward
and laughable moment when John Travolta and Idina Menzel shared the stage to present an award.  Attempting to make up for last year’s guffaw
when he butchered her name and addressed her accidentally as Adele Dazeem, the
actor’s chin grasp, condescending smile and extended hug were a bit much for
our taste.  Better to have left water
under the bridge.


Despite the sudden downpour and upper 50 degree temperature, Hollywood’s biggest night succeeded as planned. The stars flashed their smiles, the champagne was flowing and all was good in the land of LA. That’s all folks!